Men’s Team of the Week: February 23 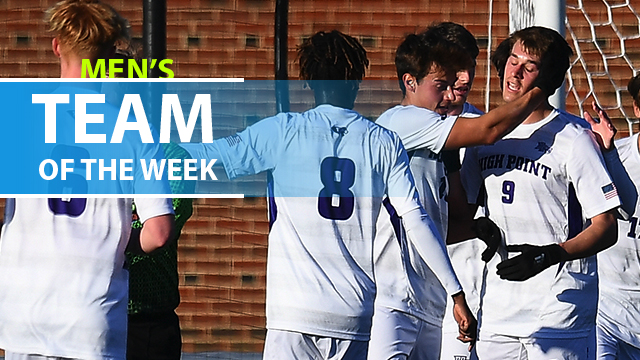 Getting off to a strong start in the conference season is critical in this different season.

That’s true whether it’s the Pac-12, Big South or Big Ten. And the latest men’s Player of the Week helped his High Point side out to a big win to open up the season.

Philadelphia Union Academy product Matthew Myers scored twice in High Point’s 4-0 win against Gardner Webb, laying down a marker for the spring season in the Big South. Both of his goals came from set pieces, while Myers also had a hand in the second goal of the game, winning a penalty in the first half that was dispatched by Sebastian Chalbaud.

See some of the other top performances over the past week of action in Division I men’s soccer below.

GK Kainoa Likewise, Air Force – Eleven saves from Likewise ensured a 0-0 draw for the WAC side on the road against UNLV. In total, he faced 20 shots, turning aside the 11 on frame.

D Luis Grassow, Kentucky – Another shutout for the Wildcats, as their strong form in the fall carries over to the spring. Grassow played every minute of a 1-0 overtime win against Duke. He won 75% of his defensive challenges and completed 85% of his pass attempts.

D Jackson Ragen, Michigan – The senior center back helped his side overcome a slow start against Northwestern. Ragen played the full match of a 4-1 win, converting a penalty kick and helping to keep the game close after the Wolverines conceded first.

D Keegan Tingey, Stanford – After leading the Cardinal attack to a barnstorming 5-0 win against San Francisco, Tingey helped shut the door on local rivals California, as Stanford opened up the Pac-12 schedule with a 3-1 win at home.

M Henrique Gallina, South Florida – The junior from Brazil bagged the second goal of the night for the Bulls, as his 54th minute strike stood up as the difference in a massive 2-1 win at UCF.

M Chris Sullivan, Bowling Green – Involved in all three goals of Bowling Green’s 3-2 win against Dayton, Sullivan setup the first, scored the second and had the primary assist on Jacob Erlandson’s winning strike.

M Jackson Temple, Rutgers – It was a good weekend for Philadelphia Union Academy alums, and Temple was involved in both goals for the Scarlet Knights in their Big Ten opener. Temple slipped teammate Ritchie Barry in on goal for the opener, and then was also credited with an assist on the second goal. He cut in from the wing onto his left foot and his shot was spilled into the path of Colin Beasley who made it 2-0 against Michigan State.

F Matthew Myers, High Point – After a brace in High Point’s first match against a Division II school, Myers made it four goals in two games in his side’s Big South opener.

F Victor Bezerra, Indiana – Heading into a big season as a sophomore, Bezerra provided a pair of lovely finishes as IU had little trouble with Friday’s opening Big Ten matchup against Wisconsin.

F Gloire Amanda, Oregon State – Make it back-to-back Team of the Week nods for Amanda. This week, he scored both goals in a 2-1 road win against Washington in OSU’s Pac-12 opener.