Men’s Team of the Week: February 9 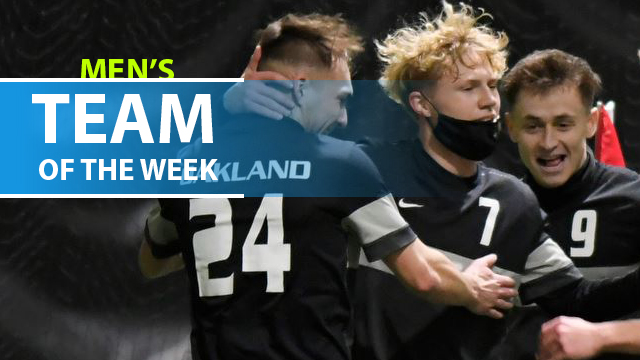 While conference play remains far off in some leagues during the spring, the Horizon League jumped right into action during last week’s men’s DI restart.

No team enjoyed a better showing than Oakland, which defeated Roberts Morris by a 5-0 score in last Thursday’s first competitive game of 2021 for both teams.

Buoyed by the first men’s DI Player of the Week for 2021 in Dylan Borczak, Oakland scored three times in the game’s first 35 minutes, and never looked back. They outshot a re-tooling RMU side 22-1, sending out a marker to the rest of the league.

Borczak scored three times, all before the break, and assisted on the fourth goal of the day, one of a handful of standout offensive performances.

#7 Dylan Borczak had a few tricks in his hat in the first half and there's still time for more! 🎩 pic.twitter.com/nK81AKxFBB

Check out some of the other top performances from the first week of action.

Submit any future Team of the Week candidates during the spring season to college@topdrawersoccer.com.

D Mitchell Cashion, Tulsa – Another upset, this one in the AAC, took place at Central Florida as the Hurricanes defeated UCF. Cashion started at the back and helped to keep a clean sheet, setting up the decisive goal in a 1-0 victory.

D Thomas Haney, SMU – With a tough two-game road swing to open the season, SMU picked up its first three points of the season in a 2-0 win over Memphis. Haney backstopped the win, scoring a second-half insurance goal.

D Chase Niece, Saint Louis – After a 90-minute shift last Wednesday in a 3-0 win over UMKC, Niece scored a pair of goals versus McKendree in a narrow 2-1 win.

M Quinn Matulis, Air Force – The Falcons got off to a flying start, winning 4-0 against Dixie State. Matulis setup two of the team’s four goals, as four different players found the back of the net.

M Lucas Meek, Washington – Facing an NAIA school and Gonzaga to open up the season, Meek and the Husky attack were in form, scoring nine goals in two games. Meek bagged a brace in the 3-0 defeat of Gonzaga and had an assist against Northwest.

M Dylan Borczak, Oakland – With a hat trick in the first game of the season, Borczak is just one goal from a season-high tally he set in 2019 with four goals.

M Jalen Campbell, Temple – The Ontario native scored two goals, including the winner as the Owls defeated South Florida away from home to open up the season.

F Karsen Henderlong, Xavier – Two goals from the sophomore paced the Big East side to a non-conference win on the road against East Tennessee State.

F Logan Farrington, Wisconsin-Milwaukee – Another entertaining Horizon League opener between Wisconsin-Milwaukee and Purdue Fort Wayne, Farrington’s two goals provided the winning margin for his side. The Panthers had to hold on after scoring the game’s first three goals, managing to cling to the victory last Thursday.

F Javanne Smith, Lipscomb – Smith had a hand in all three goals as Lipscomb opened the season with a win against Evansville. After assisting on Tyeese Spicer’s tally, Smith bagged a brace for himself in the 3-1 victory.