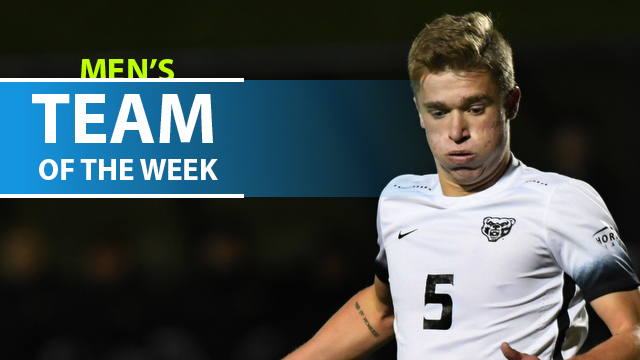 In a season when most conferences are staying within their league for games, the Horizon League chase is setting up to be an exciting one.

Northern Kentucky is off to a great start in the season with UIC and Oakland in the mix. And it was the latter to supply the latest Player of the Week in the men’s Division I season.

Noah Jensen scored the winning goal in a wild 4-3 win against Wisconsin-Milwaukee. The victory keeps Oakland in the mix for the race to the top of the Horizon League. Jensen, a senior from Ontario, Canada, also had a hand in the three other goals of the game, credited with an assist on each one.

D Sean Suber, Charlotte – An unbeaten start to the Conference USA season continued for the 49ers, which defeated UAB by a 3-0 score. Suber anchored the shutout and converted a penalty kick for the game’s opening goal in the victory.

D Nick Richardson, Maryland – In need of a road win against a very good Michigan side, Richardson handed out a pair of assists in a 2-1 victory over the Wolverines.

D Tim Iscra, DePaul – A goal in each game last week from the senior, including the winner versus Creighton, got the Blue Demons back into the win column twice. He tallied in a 3-2 win at Xavier before scoring the decisive tally

M Noah Jensen, Oakland – Jensen’s demonstrated a tremendous ability to create chances for Oakland continued last week. He now has 10 assists on the season, the most in the country, to go with three goals.

M Christian Soto, Washington – Along with junior Dylan Teves, Soto is enjoying a scintillating spring season. That continued last week as he helped marshal wins against Seattle and UCLA.

F Jake Schneider, San Diego – A sophomore from Hawaii, Schneider scored the first two goals of his collegiate career with a brace, including the game winner, against San Francisco.

F Gabe Segal, Stanford – After going down two goals, the Cardinal showed that they are inevitable once again. Segal capped off a comeback with the winning goal in the second half, calmly slotting home a second half winner in a 3-2 defeat of Oregon State.

F William Akio, UTRGV – Two goals from the senior led his side to an important WAC win against UNLV. Akio scored a penalty, accounting for the winning margin in a 3-1 win.