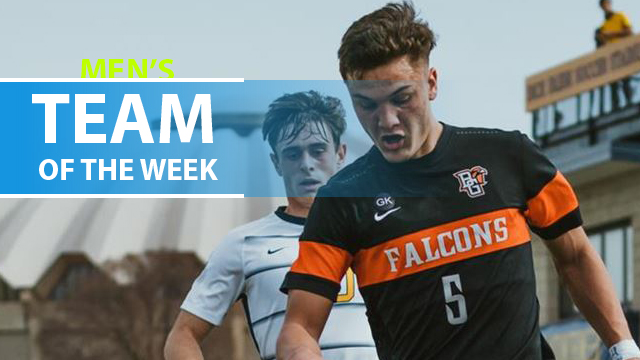 With the spring 2021 automatic bid in the Mid-American Conference going to the regular season champion, each game is a massive one.

That’s why it was crucial for Bowling Green to bounce back last week. After dropping a conference opening matchup against Akron, the Falcons soared on the road.

Anchoring a pair of 1-0 wins against West Virginia and Northern Illinois – the latter side which defeated Akron 3-0 at home – was Jacob Erlandson, who earns the latest TDS Player of the Week nod.

The defensive anchor scored the game-winning goal against West Virginia in a mid-week matchup. He then went the distance on Sunday, a 1-0 win at Northern Illinois. Nothing is decided yet in the conference race, but Bowling Green is right back near the top of the heap.

GK Jackson Lee, George Mason – It’s been a tricky start to Elmar Bolowich’s head coaching return at the Atlantic 10 program. But Lee did pick up two clean sheets last week, as Mason secured a pair of 0-0 draws against VCU and George Washington. The freshman from Perth, Australia played all 110 minutes of both matches.

D Hamady Diop, Clemson – The freshman is in the early stages of his college career after missing the fall campaign. He helped the Tigers blank NC State, and converted the winning penalty to secure a 1-0 result for the ACC tournament champs.

D Charlie Ostrem, Washington – Washington managed to edge a tight clash against Stanford, keeping a clean sheet and getting a late goal through Dylan Teves to win it late. Ostrem played the full 90 and setup the winning goal late in the second half.

D Jake Erlandson, Bowling Green – After the 2-0 loss at Akron to open MAC play, Bowling Green has three straight 1-0 wins against conference foes, underlying the importance of a senior defender like Erlandson.

D Cole McLagan, Furman – Two goals and an assist from McLagan from his right back spot secured a 3-2 overtime win against UNC Greensboro. It was a massive Southern Conference matchup won by the Paladins.

M Skage Simonsen, SMU – After suffering two straight defeats in AAC play, SMU needed a bounce back win in a big way. They got it in the form of a 3-2 victory against South Florida at home. Simonsen scored all three goals to lead the way.

M Jacob Stensson, Denver – Another side that’s back in the thick of its conference race, Stensson ensured Denver would get two wins from two games on a trip to UMKC. He bagged a brace and added an assist in a 4-1 win to open the two-game trip to KC, and then setup the game winner in a 1-0 win on Saturday against the same side.

M Zyan Andrade, Marquette – The Golden Eagles have taken control of the Midwest Division, rattling off two more wins over the past week. Andrade tallied the winning goal in overtime against a 10-man Creighton side on Saturday, a big win away from home.

F Gloire Amanda, Oregon State – The nation’s top scorer continued to shine in Pac-12 play. Amanda scored twice and had an assist in a 5-0 win against San Diego State.

F Daniel Bloyou, Penn State – A transfer addition to Penn State with the 2020 class, Bloyou had a strong week in Big Ten action as the Nittany Lions picked up a pair of wins. He scored a brace in a 4-2 win over Rutgers, and notched the winner against Northwestern on Friday.

F Josh Luchini, Lehigh – A hat trick from Luchini fired Lehigh to a first win of the season, defeating Bucknell by a 4-1 score.