Men's Team of the Week: March 2 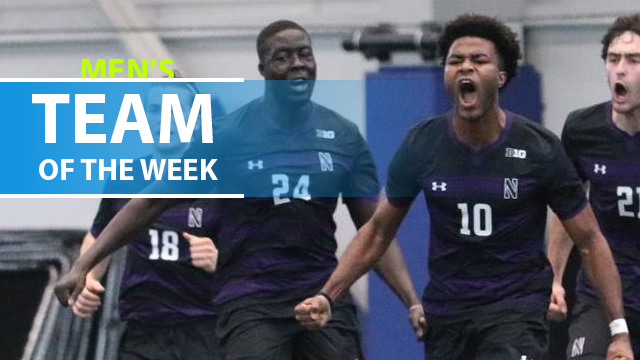 It was a week of topsy-turvy results in the Big Ten.

Indiana looked the part of world beaters after the first two games of the conference schedule, handling Wisconsin and Ohio State.

But a strong effort from Northwestern and a rampant performance from the latest TDS Player of the Week ensured the Wildcats would come away as 1-0 winners in a surprise win on Saturday.

Northwestern forward Ugochukwu Achara had a monster pair of games over the past week. He scored twice and setup another goal in a 5-2 win against Wisconsin, and then bagged the lone goal of the game in the victory over IU.

GK Danny Cordero, Liberty – Unbeaten in their first five games, Cordero kept his defense organized in front of him as the Flames blanked UNC 1-0 on Wednesday night. He made just one save but was alert when he needed to be in the win against the ACC side.

D Thomas Beecham, California Baptist – Beecham helped Cal Baptist to an unbeaten week in WAC play. After contributing to a 0-0 draw against UTRGV, he scored in a 2-1 win on the road at Houston Baptist.

D Nick Dauchot, Loyola Marymount – It was a dominant win for Dauchot and LMU, which blanked Santa Clara by a 3-0 score. The center back set the tone, completing 82% of his passes and winning 79% of his challenges.

D Bryce Washington, Pittsburgh – A first-half penalty conversion was the only goal of the game between Pitt and Duquesne, as the center back finished from the spot and helped to secure the shutout.

D Chandler Vaughn, Saint Louis – The left back played every minute in two wins last week for the Billikens against Big East foes. He helped blank Butler by a 2-0 score last Monday, and then scored a goal and setup another in a 3-1 defeat of Xavier.

M Dante Polvara, Georgetown – Finally off to a start this spring after COVID issues, the Hoyas secured a 3-0 win at Villanova to begin Big East play. Polvara bagged two goals, including a penalty kick to put the result out of reach.

M Jeanpaul Marin, Seton Hall – Another side enjoying a great start to 2021, Marin chipped in a hat trick of assists over two games last week. They were both wins, including the helper on the game’s lone goal in a 1-0 win over St. John’s.

M Noah Hilt, SMU – The Mustangs are rolling through their first three games, which continued with a 5-0 win against Memphis on Saturday. Hilt scored and added a pair of assists.

F Alex Meinhard, Tulsa – Thanks to some scheduling oddities and a game postponed due to weather, but the Hurricanes have two wins in two game versus UCF. Meinhard, a freshman from Estonia, scored two goals and setup the other in a 3-1 win.

F Tony Pineda, West Virginia – It was a solid 3-0 victory for the Mountaineers to open the season, with Pineda grabbing two goals.

F Ugochukwu Achara, Northwestern – Achara exceeded his goal total from his freshman season in one week. He scored just two times in 12 games in 2019, and his three is a career high. If he keeps it up, perhaps Northwestern can emerge as a Big Ten contender.