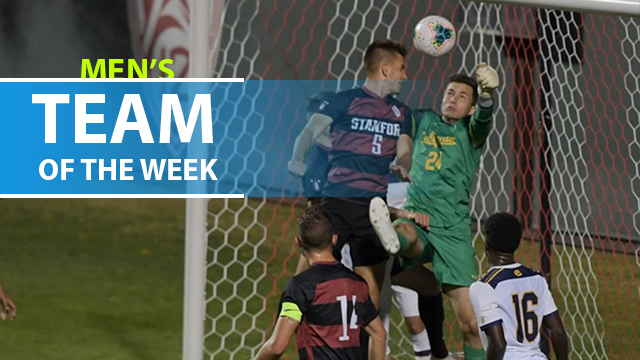 Can Cal make a late push in the Pac-12 race?

While Stanford, Oregon State and Washington have jumped ahead of the other three, the Golden Bears left their mark in the spring competition, with a big help from the latest men’s DI Player of the Week.

Redshirt freshman goalkeeper Collin Travasos enjoyed a stellar showing in goal in matchups with the Cardinal and Beavers during the past week of action. A five-save effort on Thursday against the Cardinal led Cal to a 0-0 draw; he followed that up with five more saves, facing 25 shots against Oregon State in a 1-0 win on Sunday at home against Oregon State.

GK Collin Travasos, California – After his side struggled through the first few weeks of the season, Cal and Travasos now have three shutouts in a row, securing two wins and a draw. A tricky trip to Seattle to face Washington lies ahead this weekend.

D Finn McRobb, High Point – The Scottish defender from Celtic has brought a high level to the High Point back line, and it continued last week. Playing two games in four days, the freshman anchored a pair of shutouts, playing every minute in wins against Presbyterian and USC Upstate as High Point held on to first place in the Big South.

D Brandon Hackenberg, Penn State – On the opposite side of the experience spectrum, Hackenberg marshalled a two-shutout stretch for the Nittany Lions. The senior started in both 1-0 wins against Ohio State and Wisconsin.

D Alex Mirsberger, Marquette – A consistent presence in the back line during a strong season for the Golden Eagles, Mirsberger bagged the game winner against DePaul last Wednesday to secure a win in overtime. He also played every minute of a 1-0 shutout victory over the weekend against Butler.

M Charles Auguste, Creighton – A goal and assist from the midfielder ensure the Bluejays picked up the full points in a crucial Big East matchup with Xavier last Wednesday.

M Willy Miranda, San Jose State – It was a big breakout performance for the senior against Cal Baptist on Friday. Miranda’s hat trick ensured SJSU snagged a 4-0 win, their second of the season.

M Omar Hernandez, Wake Forest – Another player trending in a positive direction for the Demon Deacons, Hernandez now has three goals in his past two games. He scored twice, including a fantastic free kick, in Saturday’s come-from-behind win against Louisville at Spry.

F Nicolo Mulatero, Missouri State – Two goals and an assist from the junior secured a wild 3-2 win against Drake last Monda. Missouri State has won all seven games in a row to start the season.

F Thorleifur Ulfarsson, Duke – Duke’s midseason addition had a breakout of his own last week, bagging a hat trick as the Blue Devils upended Virginia by a 3-1 score in Charlottesville.

F Logan Farrington, Wisconsin-Milwaukee – Returning to action for the first time since March 12, Farrington scored twice and provided an assist in last Wednesday’s 4-0 victory against IUPUI.