Men's Team of the Week: March 9 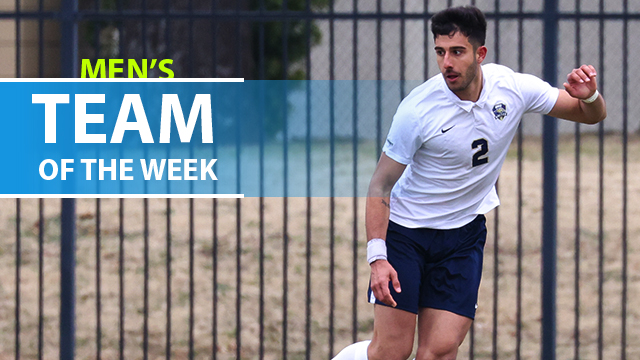 Winning games at altitude is never a small feat.

But how about winning two games in three days, on the road against the top rival in the conference?

That’s what Oral Roberts pulled off last week, securing a pair of 1-0 victories against Denver. The wins extended their record to 7-0-0 overall and put ORU in the driver’s seat for the Summit League title.

Anchored by Lucca Rodrigues, a senior center back from Brazil, the ORU back line conceded just four shots on goal across the two games, including just one in the Saturday game at Denver. Rodrigues played the full 90 minutes in both wins.

GK Steven Tekesky, West Virginia – The senior made four saves, including a crucial intervention late in the second half to preserve a 1-0 win against Northern Illinois. Tekesy earned his 16th career shutout as West Virginia won its MAC opener.

D Lucca Rodrigues, Oral Roberts – In seven competitive games so far this spring, Oral Roberts has conceded just one goal, picking up six shutouts on the way. Rodrigues is one of three players tied for the team-lead in minutes played.

D Ramzi Qawasmy, Providence – Two shutouts go a long way towards an unbeaten week. Qawasmy played 215 minutes as his side picked up a win and a draw in Big East play. They defeated Villanova 1-0-win overtime, before drawing 0-0 against Georgetown.

D Daniel Strachan, Akron – It was a successful week for the Zips, as Strachan anchored a pair of home victories. After Akron picked up a mid-week win over Marshall in overtime, Strachan led a 10-man side to a 2-0 win against Bowling Green in the MAC opener on Sunday.

M Tyrone Mondi, Oregon State – A goal and assist from Mondi helped the Beavers to a sixth straight win, this time a 4-0 defeat of California.

M Callum Johnson, Clemson – Returning to action for the first time in the spring season, Johnson fired home a brace as a re-tooling Clemson side won by a 3-1 score against Syracuse.

M Peter Stroud, Duke – The Blue Devils picked up a much-needed win against Virginia Tech over the weekend. Stroud setup on of his team’s four goals and helped Duke win the midfield battle.

M Colton Pleasants, UNC Wilmington – A first half goal from Pleasants set the tone for the CAA side in a 2-0 mid-week win against Campbell.

F Diego Gutierrez, Creighton – Two goals from Gutierrez were enough for Creighton to pick up a Big East win against Xavier.

F Junior Nare, La Salle – Nare bagged a brace in a Philly rivalry win, as the Explorers defeated Drexel by a 3-1 score. The South African freshman now has three goals in the past two games to go with an assist.