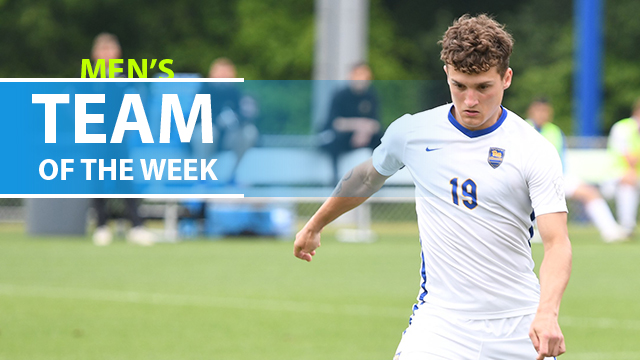 The final men’s Team of the Week drops today, looking back on the previous two rounds of the men’s Division I tournament.

Two programs reached the College Cup for the first time in their respective history. One of them, the Pittsburgh Panthers, also produced the final Player of the Week for the 2020-21 season.

Sophomore Veljko Petkovic, who has been excellent for the ACC side in both the fall and spring, scored three goals across his side’s two wins. Pitt punished a UCF mistake just 20 seconds into Thursday’s Third Round game, showing a calm, deft touch to open the scoring. He added a second as part of a 3-0 first-half outburst that put the game away. Petkovic also scored a sensational goal in the dying seconds of Monday’s victory against Washington; with goalkeeper Sam Fowler off his line with his side trailing by two, Petkovic scored from inside the center circle to round out the scoring.

“OH MY GOODNESS A WONDER GOAL FROM VELJKO PETKOVIC!”

Check out some of the other top performances from the Third Round and Quarterfinals.

GK Roman Celentano, Indiana – Making big saves down the stretch, Celentano had a huge stop to preserve a 2-1 lead in the Third-Round game against Marquette. He backed that up with six stops versus Seton Hall in the 2-0 victory.

D Joseph Pickering, North Carolina – After scoring a goal in the Third Round against Stanford, Pickering anchored UNC’s defensive effort to secure progress to the semifinals. He helped his side hold on for a 2-1 win against Wake Forest on Monday.

D Daniel Munie, Indiana – The sophomore continues to excel anchoring the stout IU defense, and he played every minute of his side’s past two wins.

D Bryce Washington, Pittsburgh – Another nod for Washington, as the American center back continues to anchor Pitt’s excellent defense. Despite the 3-0 win against UW, the Panther back line was under extreme stress late in the game as the Huskies piled on the pressure.

M Jamil Roberts, Marshall – Roberts tallied the winning goal against Georgetown, a simple tap-in at the back post off a deflected cross.

M Milo Garvanin, North Carolina – The current campaign has currently been the best of Garvanian’s college career, and he assisted on Pickering’s winner against Stanford. He played 90 minutes in both wins versus the Cardinal and Wake Forest.

M Veljko Petkovic, Pittsburgh – It’s been a stellar season for Petkovic, who has a strong claim for Player of the Year honors, especially with his performance in the tournament so far. If he keeps it up, a national championship for the Panthers could be within reach.

M Vitor Dias, Marshall – After converting the decisive penalty against Clemson, Dias was credited with the assist in the win against Georgetown.

F Valentin Noel, Pittsburgh – Noel’s header against Washington set his side on the way to victory, even as pressure piled on late. His clutch finishing has been huge for Pitt time and time again.

F Maouloune Goumballe, Indiana – Scrambling home the winner against Marquette last week was huge for Goumballe and IU, as it avoided overtime and gave them fresher legs for Monday’s game. There, he assisted on Warr’s insurance goal that put the game away.

F Kyle Holcomb, Wake Forest – Despite coming up on the short end of the result, Holcomb scored three goals in the past week, including a brace in the win against Kentucky.