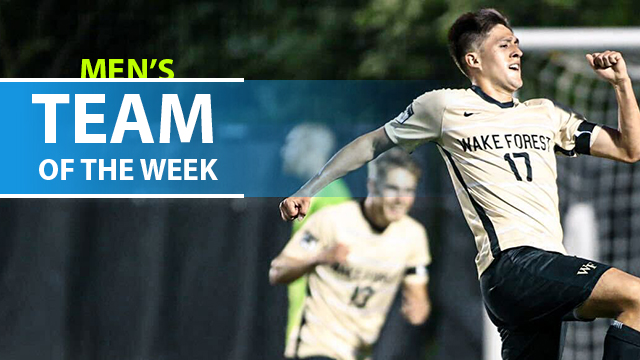 The second-to-last Men’s Team of the Week sifts through the first couple rounds of the spring tournament as the march towards Cary continues.

And for Wake Forest, sophomore Omar Hernandez is catching fire at the right time. Hernandez had two goals in Sunday, including the decisive strike in a narrow 3-2 win against a tough a Coastal Carolina strike.

He opened the scoring with a sensational goal from outside the box, and then restored his side’s two goal lead early in the second half.

Omar with another 🚀 into the back of the net for his fourth goal in as many games!

Check out some of the other top performances from last week’s action in DI men’s soccer.

D Ryan Sailor, Washington – The center back scored a wonderfully taken header from a set piece to open the scoring in Washington’s second-round matchup against Grand Canyon. He played the full 90 minutes in the 2-0 victory.

D Bryce Washington, Pittsburgh – An impressive effort from the Panthers saw them defeat Monmouth by a 6-1 score on Sunday night. The senior scored a goal to go with a strong defensive shift.

D Keegan Hughes, Stanford – It was a strong effort from Stanford, despite needing overtime against a determined Omaha squad. Hughes anchored the team’s defending in the 1-0 win.

M Omar Hernandez, Wake Forest – After scoring one goal in nine games in the fall, Hernandez is growing into his role at Wake. He now has five goals in the past three games heading into a third-round matchup with Kentucky on Thursday.

F Jon Koka, Missouri State – Just when it looked like Maryland was going to hold on for a 1-0 victory, Koka scored two goals in the game’s final five minutes to pull off a win for the Bears.

F Milo Yosef, Marshall – A pair of goals from the German, including the winning goal in overtime in a narrow 2-1 defeat of Fordham.

F Zach Riviere, Georgetown – The Hoyas saw off the challenge from a quality High Point side, as Riviere stepped up with a goal and assist for the defending champions.

F Jacob Labovitz, Virginia Tech – Labovitz accounted for both Virginia Tech goals in a second-round win against Oregon State. That included a dramatic winner with one second left in overtime.