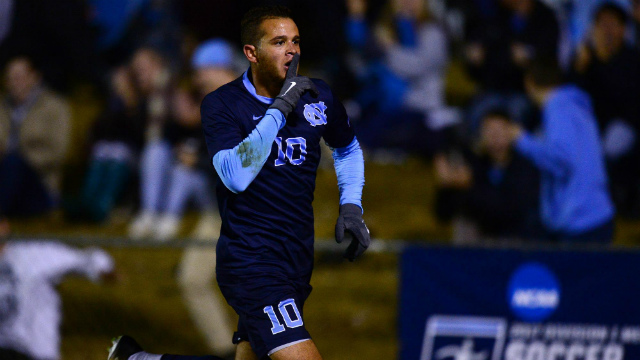 The stage is set for the men’s College Cup.

Four teams remain in the mix for the men’s NCAA Division I title, as the focus shifts to Talen Energy Stadium this weekend for the last three games of the season.

One ACC standout was decisive in helping his team punch their ticket.

Zach Wright, playing his final home game as a senior, scored the opening goal and setup the winner in the Tar Heels’ 2-1 win against a solid Fordham side.

Here’s a look at some of the other standouts from the quarterfinals in the last Team of the Week of the 2017 campaign.

Team of the Week (November 27-December 3)

GK Ben Lundt, Akron – Back-to-back misses from the penalty spot meant that Louisville held the advantage after three rounds of penalties. Zips GK Ben Lundt stepped up in a huge way, denying Adrien Cabon in the fourth round, clawing Akron back into it. He then made another stop on Sawyer Edwards, which set the table for Niko De Vera’s winning conversion.

GK Trey Muse, Indiana – Perhaps a bit awkward to have two goalkeepers on one team, though Muse was just as deserving as Lundt when it came to PK heroics. While Muse’s IU didn’t face the same kind of deficit that Akron did, Muse made three saves in the shootout, including the decisive stop against Giuseppe Barone to seal IU’s return to the College Cup.

D Joao Moutinho, Akron – The left-footed defender is far from the imperious type seen in college. However, his ability to read the game and build from the back was on display against Louisville. He also converted his penalty in the fifth round, when a miss would’ve sent the Zips home.

D Tomas Hilliard-Arce, Stanford – The imperious center back did what he does best: score from a set piece. With the first goal always vital for the Cardinal, Hilliard-Arce’s thumping header gave Stanford a lead they would not relinquish against the Demon Deacons.

D Daniel Strachan, Akron – Keeping Louisville off the score sheet for 110 minutes is no small feat, and thanks to the center back partnership of Moutinho and Strachan, Akron limited the danger in front of Lundt’s goal.

D Adam Mosharrafa, Stanford – Forming the other half of the central defense partnership, Mosharrafa combined well with Hilliard-Arce to neutralize the high-powered Wake Forest attack.

M Cameron Lindley, North Carolina – Lindley found Wright for an outlet pass that led to Alan Winn’s winning goal. The midfield general continued to dominate and will be a center piece against IU this Friday.

M Jared Gilbey, Stanford – It was a perfect delivery from Gilbey that created the opportunity for Hilliard-Arce to bag the winner against Wake. Once Stanford struck, it was an ominous moment for Wake Forest.

M Trevor Swartz, Indiana – For a program that’s never trailed this season, conceding in the first two minutes of the quarterfinal against Michigan State was going to be a huge test. And Swartz came to the rescue, when his corner kick wasn’t dealt and found the back of the net. It was a vital goal that eventually led to Muse’s heroics on penalty kicks.

F Alan Winn, North Carolina – The senior’s scoring record continues to impress, as he now has 11 goals in 16 games. He finds open spots in front of goal time and time again, and that was the case in Saturday’s win, where Winn popped up at the back post to seal UNC’s spot in the College Cup.

F Zachary Wright, North Carolina – More creator than goal scorer, Wright’s saved the best for last, with a career-high 11 assists in the 2017 season.