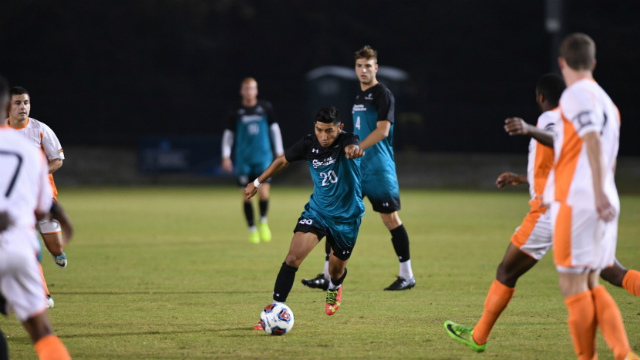 At this point of the season, it’s all about scoring or creating goals.

While defense-first efforts dominate, saving teams from the stress of penalty shootouts or going 110 minutes can be a big difference.

One player that helped his team emerge from the fray was Coastal Carolina’s Martin Melchor. The TDS Player of the Week had a hand in all four goals Coastal scored in the first two rounds of the men’s DI tournament.

After setting up Frandtzy Pierrot’s winning goal in Thursday’s 1-0 win over Mercer, Melchor scored twice and assisted on another in a 3-1 defeat of Clemson.

See which other individual standouts emerged in the first two rounds of the men’s tournament below.

D Niko De Vera, Akron – The left back enjoyed a stellar afternoon against Seattle, defending well and setting up Akron’s second goal with a beautiful ball over the top that Stuart Holthusen finished with aplomb.

D Jordan Cano, SMU – With 10 minutes left on Sunday, Cano ensured that SMU’s season would live on to at least overtime, as he scored the tying goal against Georgetown. They eventually won the game with 14 seconds left in the second overtime. Cano also led the defense to a clean sheet in the first-round win over Central Arkansas.

D Aram Ouligian, Colgate – The 6-foot-5 defender was a handful on set pieces, and that cleared the way for Colgate’s comeback win against Michigan. Down 2-0, Ouligian assisted on the first goal, and then scored the winner himself in the second half.

D Grant Lillard, Indiana – A veteran of four seasons of college soccer, Lillard erased any hints of early nerves for the No. 2 side, heading home a corner kick to open the scoring against ODU. He was his typically fantastic self at the back, limiting the Monarchs in another shutout win.

M Mike Catalano, Wisconsin – The Badgers play on in the tournament, with Catalano playing a big role. The senior midfielder accounted for two game-winning goals, bagging the second tally in a 4-1 win over UIC in the first round. He scored the golden goal in overtime on Sunday, a 1-0 defeat of Notre Dame.

M Jannik Loebe, Fordham – If something good happens for Fordham, usually one of the Loebe brothers is at the heart of it. After getting on the score sheet in a wild 3-2 overtime win over St. Francis Brooklyn, the elder Loebe setup the game-winning goal in Sunday’s 1-0 defeat against Virginia.

M Ken Krolicki, Michigan State – The Spartans blitzed past Virginia Tech on Sunday, scoring three times before the break to cruise into the third round. Krolicki picked up an assist on all three of Michigan State’s goals.

F Brandon Guhl, Butler – It was a massive weekend for the sophomore, who scored three goals in two games. Guhl bagged both goals in the first round, a 2-0 defeat of Lipscomb. He scored Butler’s third, and eventual game-winning tally, in the 3-2 win over Notre Dame.

F Frantzdy Pierrot, Coastal Carolina – The Melchor-Pierrot combination was unstoppable in two games for the Chanticleers. After scoring the winning goal against Mercer, he added a goal and assist against Clemson.