Men's Team of The Week: November 22 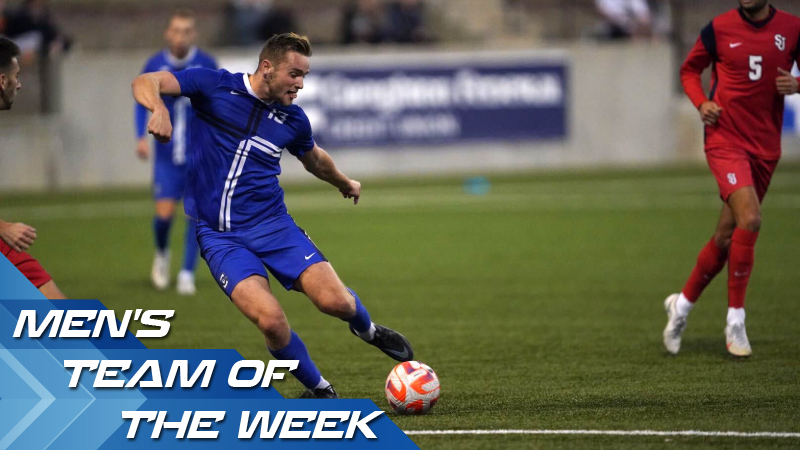 Duncan McGuire’s first goal was admittedly impressive: a dart behind a defender followed by a calm finish despite a tricky angle. The second, though, was spectacular. He ran down the middle of the pitch, relatively unmarked, before receiving the ball 18 yards from goal.

And as two defenders approached, McGuire made his move, sliding past one before cutting past the other, topping it all off with a clipped finish over an approaching goalkeeper. They were McGuire’s 20th and 21st goals of the season, the continuation of a remarkable campaign. And thanks to his play, there could be a few more games to come.

For the third time this season, McGuire is the TDS Player of the Week as the Third Round of the NCAA Tournament approaches.

Felt SO Good, McGuire DID IT AGAIN!!

GK Oliver Semmle, Marshall - Semmle showed up in the big moments, scoring Marshall’s first penalty in its shootout against Virginia, before eventually saving one to send the Herd through.

D Daniel Nimick, Western Michigan - Nimick turned in a solid defensive performance to shut out Lipscomb. He also provided the game winner, thumping in a header off a corner kick.

D Wes Bottenburg, Tulsa - The defender was dominant as Tulsa shut out an in form Georgetown attack.

M Peter Stroud, Duke - Stroud bossed the midfield in Duke’s 3-1 win over Denver. He also got himself on the scoresheet, converting on a penalty.

M Brandon Cambridge, Portland - Cambridge came alive late in Portland’s 2-0 victory against Oregon State, darting down the wing before putting a dangerous ball into the near post — which Jacob Babalai dutifully converted.

M Alex Nagy, Vermont - The Catamounts star man was at it all week, assisting two goals and scoring one of his own to help his team to the third round of the NCAA Tournament.

M Carlo Agostinelli, Stanford - Agostinelli had a brace within 40 minutes as the Cardinal thrashed High Point in the second round.

F Duncan McGuire, Creighton - McGuire led Creighton to a 3-1 upset win over Washington, scoring twice and assisting as the Bluejays knocked out the title favorites.