Men’s Team of the Week: November 23 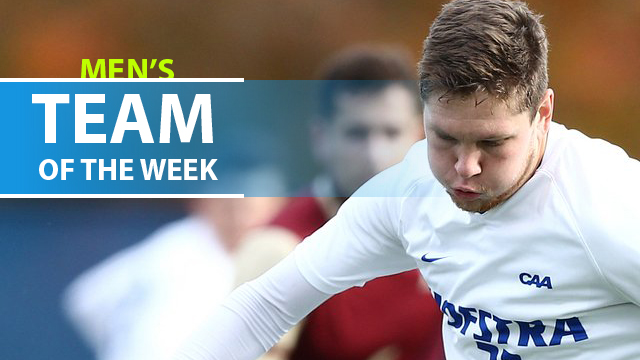 Three unseeded sides were able to advance to the third round of the men’s NCAA tournament.

Hofstra had arguably the most impressive stretch (though Providence did send home the defending champions). The Pride trounced Penn State by an 8-2 score on Sunday, after scoring four times in a 4-2 win over Lipscomb in Thursday’s first round game.

Matt Vowinkel played a massive role in Hofstra progressing, as he scored a goal in each game, and had two assists against Lipscomb and one versus Penn State. He picks up the latest Men’s Player of the Week nod for the 2021 season.

GK Roman Celentano, Indiana – Facing a tough Bowling Green side, Celentano made three saves, keeping a shutout as IU advanced to a third-round game against Washington.

D Ramzi Qawasmy, Providence – The senior played every minute in wins against Marist and Marshall, setting up a third matchup against Georgetown on Sunday.

D Mitchell Cashion, Tulsa – A goal from the defender provided the margin of victory in a 1-0 win over Creighton.

D Oskar Agren, Clemson – Outshooting Denver by a 24-4 margin at home on Sunday, the Tigers needed a late penalty kick from Agren in the second overtime.

M Dylan Teves, Washington – It’s been a collective effort offensively from the Huskies for the bulk of the season. That was turned on its head a bit as UW bombarded the Portland goal, with Teves scoring a hat trick.

M John Klein, Saint Louis – Two early goals from Klein, including the winner, set the tone for the Billikens in a 5-1 win over LIU on Sunday. SLU still has yet to lose in the 2021 season.

M Johann von Knebel, New Hampshire – The midfielder scored a goal and assist as UNH defeated North Carolina with ease by a 4-1 score.

M Dante Polvara, Georgetown – Another big game from Polvara paved the way for a 2-0 win over Georgia State. The junior converted the winning goal from the penalty spot.

F Matthew Vowinkel, Hofstra – Hofstra certainly played with a chip on its shoulder last week, as it’s fair to suggest that the Pride deserved a seed. Vowinkel needs one more assist to hit double digits for goals and assists this year.

F Kyle Holcomb, Wake Forest – A massive pair of games from Holcomb helped Wake Forest progress. He scored both goals in a 2-1 win over Mercer at home in the first round, and was on the score sheet again in the 3-2 victory against FIU on Sunday.

F Bertin Jacquesson, Pittsburgh – Without Veljko Petkovic, other players have stepped up to create or score chances. Jacquesson had a goal and three assists as Pitt defeated NIU.