Men’s Team of the Week: November 9 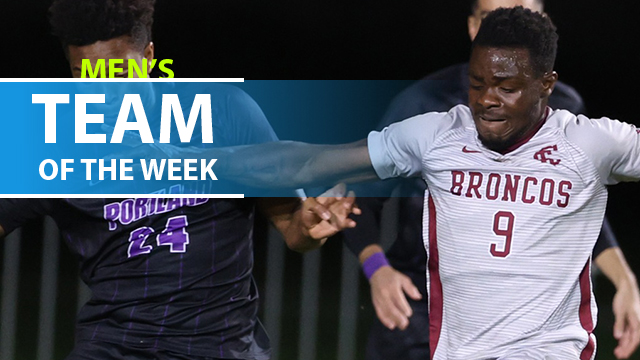 The Santa Clara Broncos are back in the big dance.

A 3-1 win for the team at home against Portland secured a West Coast Conference crown, and an automatic bid to the NCAA tournament.

Oladayo Thomas aided the victory, scoring a goal and assist to nab the latest men’s Player of the Week nod. Thomas, a senior from Nigeria, tallied his side’s second goal of the game. It turned out to be the game winner, and he earned an assist on the final tally of the game.

GK Miha Miskovic, Northwestern – A strong candidate for Player of the Week himself, Miskovic had a sensational performance on Sunday in College Park. The Serbian goalkeeper made 10 saves in a 0-0 draw against Maryland, including a sensational PK stop that could’ve sealed the game for the Terps late in the second half. Then, he made a pair of stops in the shootout to knock the Terps out of the Big Ten tourney.

D A.J. Palazzolo, Saint Louis – A local who transferred back for his final year of eligibility, Palazzolo’s been excellent for the undefeated Billikens. The center back scored the winning goal and helped his team marshal a 2-0 win in the Atlantic 10 tournament quarterfinals.

M Dylan Teves, Washington – Making a road trip to Southern California, UW returned to the Pacific Northwest with two wins. Teves scored twice in a 3-0 win over UCLA, and then was credited with an assist on Nicholas Scardina’s winning goal in a 1-0 defeat of San Diego State.

M Mauro Bravo, Florida International – With a 4-1 win at home against Marshall, FIU won the Conference USA regular season title. Bravo scored a goal and was credited with an assist on another as the massive offensive explosion secured the victory.

M Noah Jensen, Oakland – Finishing the regular season on a high, Jensen scored the winning goal in a 2-1 overtime victory against Northern Kentucky. He also assisted on the game’s first tally as Oakland captured the Horizon League crown.

M Dawson McCartney, Notre Dame – The Irish is into the ACC semifinals, winning two games last week. McCartney converted the winning penalty kick in a 1-0 first round victory over NC State last Wednesday. After a 0-0 draw on Sunday versus Louisville, McCartney helped keep things tight and then converted the third penalty kick in the decisive shootout.

F Oladayo Thomas, Santa Clara – A big part of the team’s success this fall, Thomas now has nine goals and six assists as the Broncos can make plans to play at least one game in the tournament.

F Thorleifur Ulfarsson, Duke – The Icelandic forward continued his massive season, scoring a brace in a 3-2 win over Wake Forest in the ACC tournament quarterfinals.

F Ryan Madondo, Gardner-Webb – It was quite the week for Gardner-Webb, which advanced to the Big South tournament semifinals. Madondo scored four times in a 5-4 overtime winner against Winthrop, and then tallied the crucial, winning goal in a 2-1 win over Longwood on Sunday.