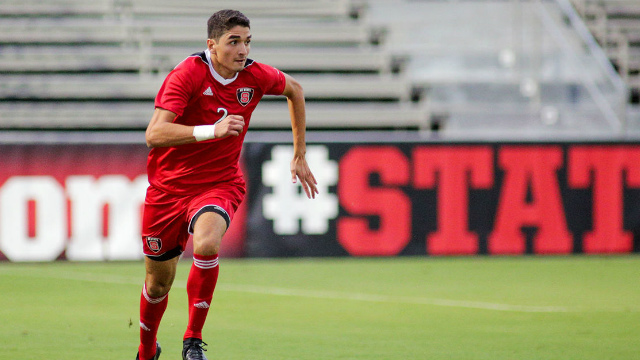 Few freshmen have made the kind of impact this fall like Manny Perez.

A big part of NC State’s surge in 2017, Perez earned a call-up to the U.S. U18 MNT earlier this month, and returned ready to make a difference.

The North Carolina native had his best week to date, accounting for two goals and three assists as the Wolfpack picked up wins against UNC Wilmington and Louisville.

Along with earning the TDS Player of the Week, Perez has solidified NC State’s chances of an at-large bid. He setup both goals in the win against UNCW, and had a hand in all three, including the winner, a huge 3-2 win on the road at Louisville.

There were several other impressive performances over the past week of Division I men’s soccer action.

GK Paul Christensen, Portland – A five-save effort ensured the Pilots would hold on at home, as they continued WCC play with a 3-0 win against Loyola Marymount.

D Kieran Geldenhuys, Butler – The junior defender played 200 minutes in an unbeaten week for Butler. First, he helped keep Indiana off the score sheet in a 0-0 draw, and then he went the full 90 in a 1-0 defeat of Villanova over the weekend.

M Lucas del Rosario, North Carolina – Trailing late against Old Dominion, the freshman stepped up in a big way for the Tar Heels, scoring two goals to provide a 2-1 overtime win. That earned him a first career start on the weekend in a 4-0 win over Virginia Tech.

M Christopher Lema, Georgetown – A banner week for the Hoyas saw them win a tight clash at Maryland in mid-week, and cruise at home in a Big East battle against Seton Hall. Lema created the game-winning goal against the Terps, and then scored twice, including the winning tally, in a 3-0 defeat of the Pirates.

M Noah Paravicini, Dartmouth – In a critical Ivy League clash, the junior midfielder from California netted what turned out to be the game-winning goal

M Joris Ahlinvi, Florida International – The sophomore struck twice in two games last week, including the winner from the penalty spot as FIU cruised past New Mexico by a 4-0 score over the weekend. He also tallied the opening goal in a 2-1 win over in-state rivals South Florida.

F Manny Perez, NC State – Last week’s stat haul bumps Perez up to five goals and four assists on the year. He’s building a strong case for Freshman of the Year honors with his play of late.

F Foster Langsdorf, Stanford – The senior continues to have another strong season, scoring the game-winning goals for the Cardinal in wins against Washington and Oregon State. He now has 10 tallies on the campaign.

F Sam Gainford, Akron – Continuing to come back from injury, Gainford scored a goal and assisted on another as the Zips defeated Notre Dame 2-0 at home last week. He also setup both goals as Akron topped Bowling Green 2-1.