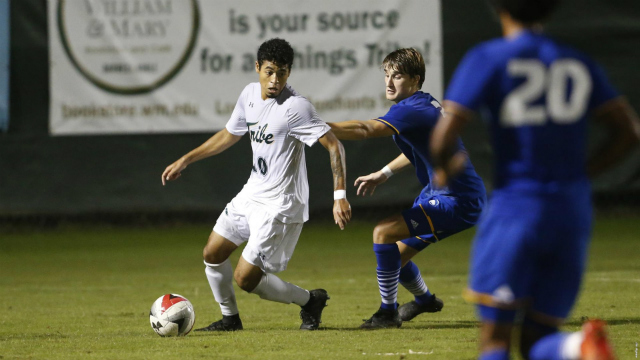 The men’s Division I season has reached the conference tournament stage in several leagues around the country.

One team that survived the opening weekend of its tourney was William & Mary, thanks in large part to the latest TDS Player of the Week.

Junior attacker Antonio Bustamante scored all four of his team’s goals in a 4-1 win on the road against Hofstra that advanced the Tribe to this weekend’s CAA semifinals.

There were several other impressive efforts over the past week of men’s DI action, with just under a week until the NCAA field is revealed.

Team of the Week (October 30-November 5)

GK Jefferson Caldwell, Virginia – It was a solid week for Caldwell, who played 200 minutes across two games without conceding a goal. He then made two saves in penalty kicks as Virginia advanced past Louisville in the ACC tournament.

M Antonio Bustamante, William & Mary – With goals in five of his last seven games, Bustamante continues to show he is a key figure for the Tribe. He now has 12 goals on the season, and his four tallies in one game tied a program record.

M Harry Cooksley, St. John's – The Red Storm get at least one more game after defeating Creighton by a 3-1 score on Saturday in the Big East quarterfinal. Cooksley, the conference Midfielder of the Year, setup all three goals in the win.

M Rafael Andrade Santos, VCU – Last week’s Player of the Week returns after scoring twice and adding an assist in a 4-1 win against Saint Bonaventure on Sunday. The A10 tournament win continues VCU’s strong season, while Santos builds a strong case for a spot in one of the TDS Best XI teams.

M Mark Segbers, Wisconsin – Great work down the right flank by Chris Mueller in the dying minutes of Sunday’s Big Ten quarterfinal setup Segbers for the game-winning goal against Maryland.

M Corey Baird, Stanford – A big weekend for the Cardinal saw them brush aside both UCLA and San Diego State on home turf. Baird contributed in the final third scoring a goal and setting up another in a 5-1 defeat of the Bruins, while also adding a brace in the win over SDSU.

M Brandon Bye, Western Michigan – It continues to be a memorable 2017 for the Broncos, which wrapped up a perfect MAC campaign with another 1-0 win, this time over Bowling Green. As he has all season, Bye scored the winner on Saturday, his fifth w

F Jon Gallagher, Notre Dame – The senior helped the Irish blast Pitt last week by a 5-0 score, as he found the back of the net two minutes into the game. He also scored what turned out to be the game-winning goal in a 2-1 road upset against North Carolina.

F Brian Saramago, Loyola (MD) – Needing a win to capture the program’s first-ever Patriot League title, Saramago delivered the game-winning goal in the first half against Lafayette. It stood up in a 1-0 victory, with the Greyhounds now set to host the Patriot League semifinals and finals this coming weekend.

F Stuart Holthusen, Akron – A torrid end to the regular season continued for Holthusen, who scored three times in wins against Marshall and Northern Illinois. The Kiwi now has six goals in his last three games.