Men’s Team of the Week: October 12 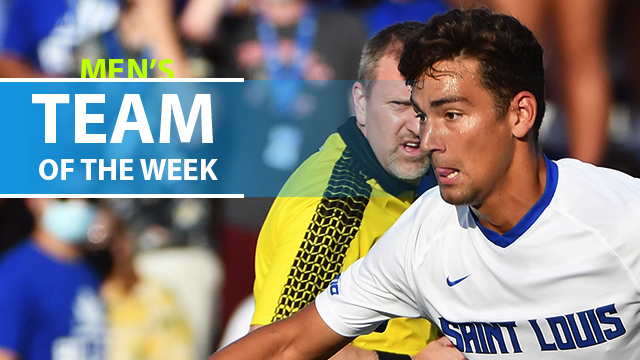 It was quite the week in the race for the Atlantic 10 regular season title.

And with two road wins, Saint Louis took a big step towards securing the championship this fall.

SLU defeated Duquesne by a 3-2 score in a mid-week matchup on Wednesday, thanks to a Chandler Vaughn goal. On Saturday, making the trip to Richmond, the Billikens bagged an impressive 4-1 win against VCU. The latest TDS Player of the Week, Simon Becher, played a pivotal role in both wins. In both games, Becher scored a goal and assisted on another, including the overtime winner over Duquesne.

Check out some of the other top performances from the past week of action in men’s DI soccer.

D Adrian Lara, Northern Illinois – The defender scored the game-winning goal and helped NIU keep a zero on the scoreboard as they picked up a huge MAC win against West Virginia.

D Ryan Sailor, Washington – Sailor makes the Team of the Week for the second week in a row after scoring a goal against Stanford in a 3-1 win last Thursday. The center back played the full 90 in Sunday’s 4-0 defeat of Cal.

D Pol Hernandez, Xavier – Two Big East road wins were massive for Xavier last week, moving their record to 8-4. Hernandez went the full 90 in both games, a 2-1 win against Marquette and 1-0 defeat of Seton Hall. The Spanish defender notched an assist in the win over the Golden Eagles.

M Tyler Bagley, Cornell – It was a wild Ivy League matchup between Cornell and Harvard. After going up 5-0, the Big Red held on for a 5-4 win, conceding four goals in the final 30 minutes. Bagley scored a goal and handed out three assists for the Ivy League program.

M Alberto Anaya, Bowling Green – Facing a pair of MAC opponents from Georgia, Anaya helped BGSU come up with a pair of wins. The freshman scored a goal and setup another in a 3-2 win against Georgia State. He also scored in a 4-0 victory over Georgia Southern.

M Mauricio Villalobos Vega, UCF – The midfielder had two assists in UCF’s 3-2 upset win against Tulsa over the weekend.

M Bertin Jacquesson, Pittsburgh – After a slow start to the season, Jacquesson is heating up. He had a goal and two assists against Cleveland State in a 4-0 mid-week match. More importantly to the ACC race, he scored the winning goal in Pitt’s 3-2 defeat of Duke.

F Simon Becher, Saint Louis – It’s shaping up to be a sensational season for Becher, who is closing in on 10 goals and 10 assists. He’s at eight and seven respectively after last week’s output.