Men’s Team of the Week: October 19 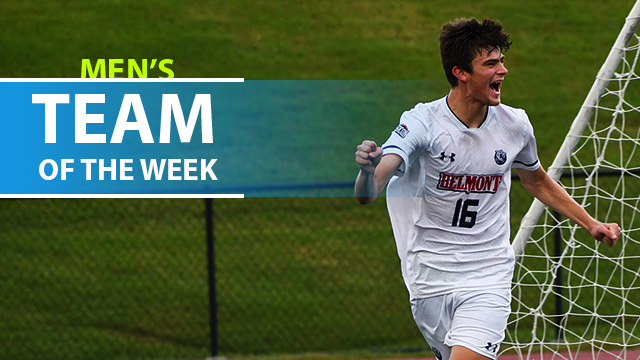 It was a big week in the Southern Conference title race.

Belmont welcomed UNC Greensboro over the weekend, with a win for the latter all but clinching the regular season crown for the visitors. But AJ Chastony had other plans

The sophomore from Kentucky scored the game-winning goal, securing a 2-1 win and keeping Belmont in the conversation for the title race. It was his second winner of the week, as Chastony bagged the decisive goal earlier in the week in a 2-1 win against Evanville.

Check out some of the other top performances from the past week of men’s Division I soccer.

GK Detre Bell, Louisville – A five-save effort between the posts from Bell propelled Louisville to a quality 2-0 win against North Carolina over the weekend. He also played 90 minutes in a shutout win over Eastern Illinois earlier in the week.

D Nykolas Sessock, Indiana – On the hunt to climb back into first in the Big Ten, Sessock helped IU lock down a pair of shutout wins in Big Ten play last week. After playing 90 minutes in a 3-0 win against Ohio State, Sessock helped to setup the game winner on Sunday against Penn State, as his cross was turned in for an own goal in the 1-0 game.

D TJ Presthus, Yale – Facing two high-quality opponents last week in New Hampshire and Cornell, Yale came away with a 1-1 draw in the former and a 1-0 win in the latter. The freshman defender played every minute, laying the foundation for the critical Ivy League win against the Big Red.

D Hugo Bacharach, Fairleigh Dickinson – The Spanish sophomore scored a goal in a 3-3 draw against Central Connecticut on Thursday. He followed that up with a 90-minute defensive effort, as FDU kept a clean sheet against league-leaders LIU, winning 2-0.

M Luis Felipe Fernandez-Salvador, Clemson – In just 42 minutes, the sub made a huge impact in Friday’s crucial game against Duke. He scored the winning goal in overtime, while assisting on Hamady Diop’s tally in the second half of the 3-2 win.

M Isaiah Parker, Saint Louis – The powerhouse freshman scored directly from a corner kick and had an assist in SLU’s 2-0 win against Dayton last week.

M AJ Chastonay, Belmont – It’s been a clutch run for Chastonay, who now has four goals in the last five games, all wins. The path to the NCAA tournament requires a win in the conference tournament, but at least a share of the regular season title is possible.

F Aaron Edwards, UCLA – Another freshman with a big performance last week, Edwards scored a brace in UCLA’s massive 2-1 non-conference win against Loyola Marymount. It’s a big, resume-building victory for the Bruins as they seek to return to the NCAA tournament.

F Dante Brigida, Oral Roberts – The grad student scored twice in a tight clash in Summit League play with Omaha, including the game winner in a 3-2 victory.

F Daniel Tshiani, Loyola (MD) – Two massive wins in Patriot League play have thrust the Greyhounds back into the regular season title race. Tshiani scored the winners in both, victories against American and Navy.