Men's Team of the Week: October 20 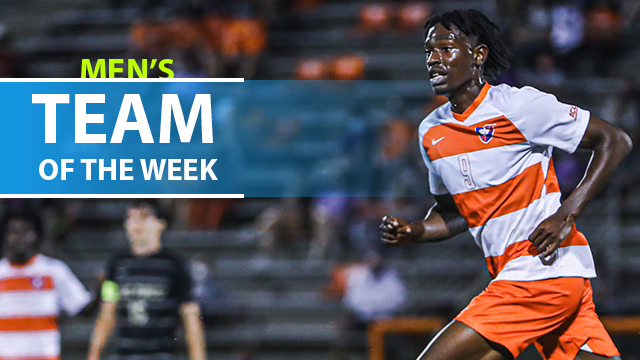 It’s no surprise that Kimarni Smith had an impact in both games.

Facing a double-dip of conference games at home, Smith had a hand in three of the four Clemson goals, as they picked up 2-1 wins against Wake Forest (Tuesday) and Duke (Friday) in overtime.

Smith cracked open the scoring against Wake Forest, and then had a hand in the winning goal versus the Demon Deacons. He added an assist on James Brighton’s overtime winner against Duke.

Check out some of the other top performers from Division I men’s soccer games over the past week.

Not a bad way to score your 20th career goal 😎

Kimarni Smith slotted home his second goal of the season to give #ClemsonUnited its first goal of the game en route to a 2-1 victory! pic.twitter.com/m8bk5oQ2GW

GK Paul Tyson, Georgia State: The 6-foot-7 goalkeeper was solid in steady in a pair of wins, including a 3-0 shutout against Georgia Southern.

D Marcelo Lage, Coastal Carolina: Double-dipping against Central Arkansas, Lage is a 6-foot-5 center back that knows how to make his presence felt for the Chanticleers. He scored once in each game against UCA, including Sunday’s winner in a 1-0 game.

D Arturo Ordonez, Pittsburgh: A goal and an assist from Ordonez – including the winner in overtime – extended Pitt’s win streak to four from four games to start the season.

D Oskar Ågren, Clemson: While the Tigers weren’t able to secure any shutouts, their defense held firm. Agren anchored the back line in the wins against Wake Forest and Duke, completing 90% of his passes against the latter.

M Andrew Bennett, Georgia State: Making just his third start of the season, the England native had a hand in all three goals in a 3-0 win against Georgia Southern, scoring twice and assisting on the other goal.

M Kalil Elmedkhar, Kentucky: With just one game left in the fall, ElMedkhar continues to make the most of his chances to impact the game. He scored and setup another goal in a 3-1 win against Mercer, and then followed that up with a 2-0 win versus UAB.

M Justin Guest, Georgia State: The sophomore scored and assisted on another goal in an easy 4-1 win against UAB last Wednesday.

M David Jackson, Navy: Making the only competitive game of the fall, Jackson scored and was credited with an assist in a 2-1 win against NC State in Sunday’s game.

F Kimarni Smith, Clemson: With Mohamed Seye sidelined after scoring twice in the season opener, Smith has stepped up his game and now has two goals and two assists through four games this year.

F DeAndre Kerr, Syracuse: Kerr’s brace put Syracuse up by a 2-0 score at home against Louisville. And while the Cardinals charged back for a 2-2 draw, Kerr’s strong start to his college career continued.