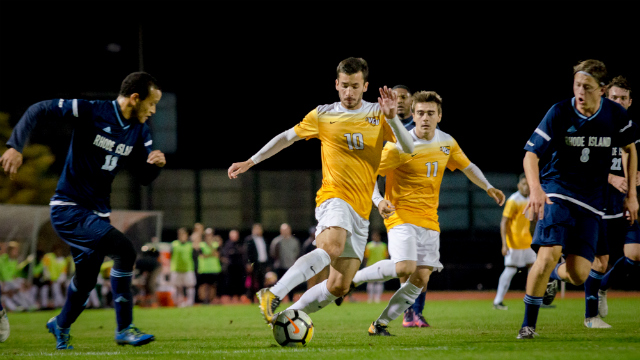 Even if VCU’s at-large hopes were on solid ground heading into last week, Rafael Andrade Santos ensured that the Rams should be back in the NCAA Tournament this year.

Facing Maryland on the road, Santos opened the scoring in sensational fashion, as a long-range strike from distance cued VCU’s 3-0 win in College Park.

For an encore, the Montverde Academy product scored an equalizer on Saturday night against Rhode Island, and then setup the game winner as VCU won 2-1 for its fourth win in a row.

GK Andrew Withers, St. John's – The Red Storm closed in on second place in the Big East with a pair of wins last week. Withers provided six saves across victories against Villanova and Georgetown.

D Sam Raben, Wake Forest – The defender logged a full 110 minutes in Wake Forest’s 0-0 draw against Syracuse, as the Orange failed to record a shot on target.

D Ben Thornton, Western Michigan – Thornton’s goal provided a 1-0 win that secured the Mid-American regular season title in a victory over SIUE. It’s the first time since 2004 that a program besides Akron capture the crown.

M Rafael Andrade Santos, VCU – His haul over the past week pushed his career best numbers to eight goals and four assists for the 2017 season.

M Daniel Wright, Duke – The freshman continues to make an impression in 2017, as he scored two goals in two games. After opening the scoring in a 2-1 victory over Delaware, Wright accounted for the game’s lone strike in Friday’s 1-0 win against Virginia.

M Leon Schwarzer, San Francisco – With two wins on a Pacific Northwest swing, San Francisco clawed back into the WCC race. Schwarzer assisted on two goals in a 3-1 victory over Gonzaga, and scored the game-winning goal against Portland.

M Lewis Suddick, Butler – With two wins last week, Butler secured the Big East regular season title. Suddick was at the heart of most of it, as he tallied the winning goal against Seton Hall and setup Butler’s two goals in Saturday’s defeat of Marquette.

M Manuel Ferriol, James Madison – The Spanish sophomore led JMU to a surprising CAA regular season championship. He scored the game-winning goals as the Dukes topped Northeastern 2-1 on the road, and tallied the winner in a 1-0 victory against Drexel.

F Stuart Holthusen, Akron – Winners of six straight, the big Kiwi led Akron to two more wins over the past week. He assisted on one of Nick Hinds’ goals in the 3-0 mid-week win over Pitt, and then scored a hat trick as the Zips topped West Virginia by a 4-0 score.

F Francis Atuahene, Michigan – Two goals, two game winners for the junior from Ghana. Atuahene found the back of the net in a 1-0 win against Detroit, and then scored the winning goal in overtime that clinched the Big Ten title for the Wolverines against Maryland.