Men's Team of the Week: October 23 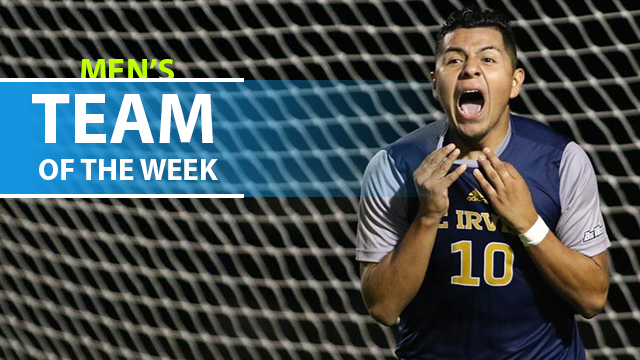 For the first time since 2013, UC Irvine are the champions of the Big West.

With a game to spare in regular season play, the Anteaters sit at 5-0-1 at the top, four points ahead of UC Riverside. It was a huge week for second-year head coach Yossi Raz, and the success on the field was secured by the latest men’s Player of the Week.

Senior forward Ivan Canales came up huge in the two title-clinching wins. He scored both goals in Wednesday’s 2-1 overtime win against Cal State Fullerton. And then on Sunday, with two seconds left, he bundled home the winner in doubt overtime to win at Cal Poly.

Canales had a hand in all five of UC Irvine’s goals last week, scoring four times and adding an assist against Cal Poly.

GK Dayne St. Clair, Maryland – The Terps are picking things up at just the right time. St. Clair was sharp last week against Denver, making five saves against the Pioneers. He also blanked Ohio State, which couldn’t even get a shot on target.

D Albert Andres-Llop, West Virginia – The junior from Spain scored a goal and setup another, playing 90 minutes as WVU took over sole possession of first place in the MAC. The Mountaineers topped SIUE 5-1 on Saturday.

D Alex Cover, Oregon State – Cover scored the game-winning goal in overtime to lift the Beavers to a 1-0 win against California over the weekend. He also played all 90 minutes of OSU's 2-2 tie at Stanford on Thursday.

D Rashid Tetteh, High Point – With a weekend off, it was all about a mid-week clash for High Point, which defeated Duke by a 1-0 score. Tetteh led a defensive effort that saw the Blue Devils get just two of 20 shots on target.

M Jack Skahan, North Carolina – A product of the Philadelphia Union Academy, Skahan made the most of a pair of starts last week. He grabbed a hat trick in a 4-0 win over Winthrop, before scoring against and adding an assist in a 2-0 victory over Boston College.

M Kalil ElMedkhar, Kentucky – An incredible season for the Wildcats continued last week, and ElMedkhar was at the heart of it all. He scored the winner in a victory over Ohio State, and then scored twice and assisted in a 6-1 win against New Mexico.

M Trevor Swartz, Indiana – Usually the creative outlet for the Hoosiers, Swartz scored the game-winning goal for IU in a win over Rutgers. That came after setting up two goals in a mid-week win over Butler.

M Kristofer Strickler, Virginia Tech – A breakout season continued for the Ohio native, who continues to come up with clutch performances for the Hokies. He scored a goal and setup another in a mid-week win against William & Mary, before scoring twice and adding a helper in a 5-2 come-from-behind win against Notre Dame.

F Ivan Canales, UC Irvine – Canales leads the Anteaters with 10 goals and is second on the team with five assists after his tremendous week. UC Irvine wraps up the regular season next Saturday against CSUN.

F Cal Jennings, UCF – An incredible season for the Georgia native continued last week. He scored a hat trick in a 5-1 win against Florida Gulf Coast, and then scored within the game’s first minutes as UCF held off in-state rivals South Florida.

F Austin Dewing, Air Force – It was a big week for the senior forward, who scored twice against San Jose State. He also opened the scoring in a 2-1 victory over Seattle.