Men’s Team of the Week: October 26 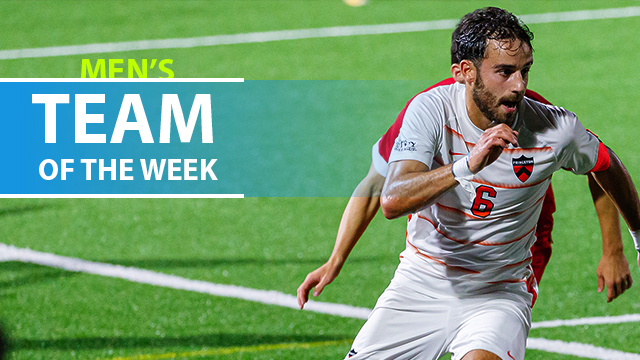 An exciting, three-team race is taking shape in the Ivy League.

Princeton currently leads the chase for the regular season automatic bid, three points ahead of Cornell and four in front of Yale. None of the three have played each other yet.

Thanks in part to a strong effort from the latest TDS Men’s Player of the Week, the Tigers have four wins in four Ivy League games. Kevin O'Toole, the 2018 Ivy League Offensive Player of the Year, scored a hat trick and assisted another goal in a 4-1 win against Harvard over the weekend. The former Red Bulls Academy product also added a goal earlier in the week, a 2-0 non-conference win against Lehigh.

See which players joined him on the latest Men’s Team of the Week.

GK Finn Jurak, Oakland – Five saves from the Australian helped his side to a 2-1 win at Louisville in a mid-week non-conference game. He kept a clean sheet in a 1-0 win against IUPUI as well, as Oakland sits in second place in the Horizon League.

D Daniel Munie, Indiana – The Big Ten side picked up a pair of shutouts last week, as Munie played every minute in wins against Evansville and Wisconsin. He also assisted the game-winning goal in overtime against Wisconsin on Sunday.

D Delentz Pierre, Portland – Portland picked up a massive win against Loyola Marymount after a two week break in their scheduled. Pierre played 90 minutes in the 1-0 victory.

D Alejandro Fernandez Alcaide, Grand Canyon – The defender assisted on the game-winning goal against UNLV, as Grand Canyon bounced back from a first conference loss of the season the weekend prior. In Sunday’s shutout against Dixie State, he played 81 minutes in a 3-0 victory.

M Kevin O'Toole, Princeton – Can O’Toole make a late push for Ivy League Player of the Year? He’s in a good spot with seven goals and six assists, though he faces a tough challenge from others in the league.

M JC Ngando, UNC Greensboro – With Belmont losing, UNCG had a chance to take control of their fate in the SoCon regular season chase. Thanks to Ngando’s hat trick of assists, they picked up a comfortable 3-0 win over Wofford. Ngando also played and had an assist in his side’s 7-1 win earlier in the week over USC Upstate.

M John Klein, Saint Louis – No team has shown that they can slow the Billikens down, and SLU rolled into D.C. and won by a comfortable 4-0 magin against George Washington. Klein assisted on three of the four goals, boosting his season total to 15 for the current season.

F Abduselam Regassa, Wisconsin-Milwaukee – Regassa helped Wisconsin-Milwaukee secured a come-from-behind win in Horizon League play. He scored his first two goals of the season in a 3-1 win against Northern Kentucky, boosting his side into third place.

F Matthew Vowinkel, Hofstra – Vowinkel had a torrid week in front of goal, involved in four of Hofstra’s five goals. He scored twice and setup another in a 4-0 win against Lafayette. More importantly, he scored the only goal in a 1-0 win over James Madison in a crucial CAA matchup on Saturday.