Men's Team of the Week: October 2 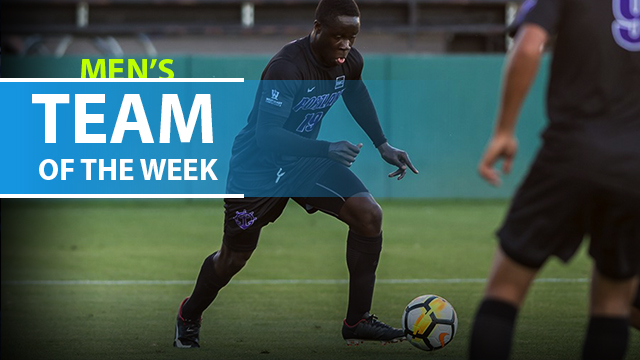 In just 10 games, the Portland Pilots have nearly matched their win total for the entirety of last season.

A nine-win campaign saw the Pilots just miss out on an NCAA at-large berth. This season, the Pilots are 8-0-2 after winning two more games, one of a handful of unbeaten teams left in men’s Division I soccer.

The past week saw the Pilots notch two more goals, thanks in large part to the latest men’s Player of the Week. Junior forward Benji Michel grabbed the winning goals against Coastal Carolina and Northern Illinois

Conference play for the Pilots begins this week, as Portland and St. Mary’s (CA) enter the West Coast Conference season as the favorites to win the regular season title and leave nothing up to chance come tournament time.

See the other top performances over the past week of men’s Division I soccer below.

GK Elliot Panicco, Charlotte – The junior shot-stopper stopped a penalty kick, helping Charlotte to a 1-0 win. In two wins last week, Panicco kept a pair of shutouts and made a total of nine saves.

D James Person, St. Mary's (CA) – It’s now four straight 1-0 wins for St. Mary’s, which had been blowing opponents out at the start of the season. Person, a freshman defender, played every minute of two 1-0 wins against New Mexico and UC Irvine last week.

D Aboubacar Keita, Virginia – The freshman’s strong season continued on Friday, as he played the full 90 minutes and scored a goal in a 2-0 win on the road against Pitt.

M Hassani Dotson, Oregon State – Dotson played a strong game on Saturday, helping the Beavers lock down the midfield in a 4-2 win over Washington. The senior helped break up the Huskies attack, and facilitated things going forward when OSU looked to get forward.

M Kalil ElMedkhar, Kentucky – Formerly a standout at the Philadelphia Union Academy, ElMedkhar’s scintillating sophomore season continued last week. He was involved in all five of Kentucky’s goals, scoring and assisting in a defeat of East Tennessee State, and following up with a goal and assist in a victory over South Carolina.

M Bruno Lapa, Wake Forest – The Wake Forest offense continued to shine last week. Lapa scored twice and setup another in a Tuesday win against Davidson, and he also found the back of the net in Saturday’s 4-2 win over Duke.

M Aiden McFadden, Notre Dame – After playing no games as a freshman in 2017, McFadden’s made the most of his chances this year. Coming mostly off the bench, the Pennsylvania native scored in wins over Xavier and Boston College, grabbing the winning goal in the ACC victory over the Eagles.

M Tate Robertson, Bowling Green – A quickfire double for Robertson against Valparaiso paved the way for Bowling Green’s 2-1 win last week. The senior scored in the 10th and 17th minutes to put the Falcons out front and provide a lead they wouldn’t relinquish.

F Amir Bashti, Stanford – Early season offensive struggles look to be in the rearview mirror for Bashti and the Cardinal. The senior scored a goal and assist each in wins against San Diego State and UCLA last week.

F Benji Michel, Portland – A native of Florida, Michel now has nine goals in 10 games this season and is sure to be high on the list of MLS clubs looking for potential Generation adidas candidates for next year’s draft.