Men’s Team of the Week: October 5 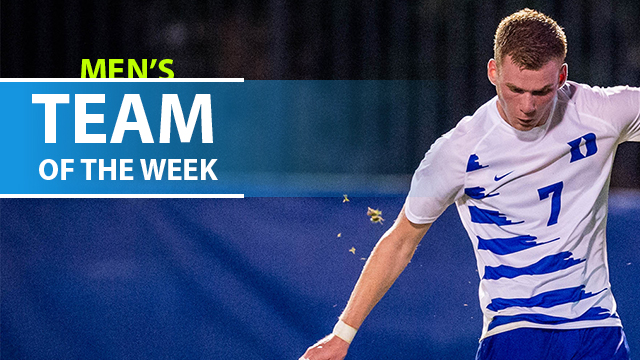 It’s safe to say that the Duke men’s soccer season is going well at this point.

With a 3-1 win against Louisville on Friday, Duke’s well-positioned to compete for a regular season title as a young team comes good under head coach John Kerr.

Thorleifur Ulfarsson is a big part of that success, and he had a pair of huge performances last week, earning the latest TopDrawerSoccer Player of the Week. The sophomore from Iceland scored five goals in two games, bagging a hat trick against Howard, and scoring twice on Friday to beat Louisville at home.

GK Will Meyer, Akron – Meyer’s strong season continued between the posts for Akron, as he made five saves in a 0-0 draw against West Virginia in Morgantown.

D Mujeeb Murana, Saint Louis – A stellar right back for SLU, Murana played every minute in a pair of shutout wins for the Billikens last week. He tallied an insurance goal over the weekend in a big Atlantic 10 win against Fordham.

D Aaron Denk Gracia, West Virginia – The German defender made several impressive plays to keep the clean sheet on his side of the 0-0 draw between Akron and West Virginia.

M Sofiane Djeffal, Oregon State – Djeffal helped Oregon State pick up a pair of Pac-12 wins, scoring the winning goal against UCLA on Thursday, and picking up an assist versus San Diego State on Sunday.

M Pedro Dolabella, Marshall – The Brazilian scored all three goals for Marshall in a 2-0 win against Butler and a 1-0 defeat of Old Dominion in Conference USA play.

M Jacob Evans, UNC Wilmington – A graduate student from England, Evans delivered in a big way for UNCW. He scored a goal in a 2-1 win against North Carolina in a big non-conference victory. Evans also scored and had an assist in a 3-2 win over Northeastern as well.

F Alex Meinhard, Tulsa – Tulsa’s perfect season continued last week with two more American Athletic Conference wins. Meinhard scored both goals in a 2-1 win against SMU, including the winner in overtime with a few seconds left. In Sunday’s 4-0 defeat of South Florida, Meinhard setup one of the goals.

F Ousseni Bouda, Stanford – After a mid-week defeat against St. Mary’s, Stanford roared back with a huge, 5-0 win against local rivals Cal. Bouda had two goals and two assists for the Cardinal in Sunday’s win.

F Andrew Akindele, Wisconsin – The forward tallied the game-winning goal in a 1-0 win against Maryland over the weekend.

F Thorleifur Ulfarsson, Duke – A hat trick for the Icelandic forward against Howard fired Duke to a 4-0 mid-week win, while Ulfarsson added a pair against Louisville.