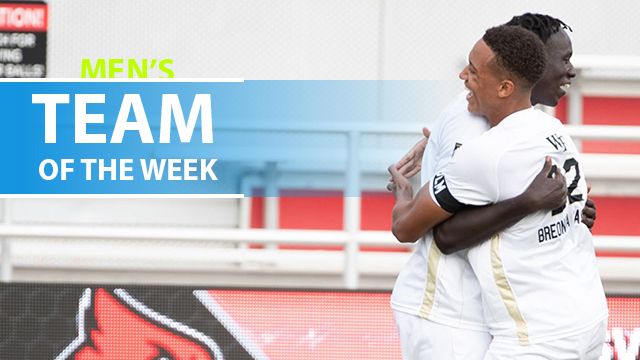 Each week serves up a tiny fraction of men’s Division I college soccer games.

But the goals still flowed in the bulk of the games that took place, whether between ACC foes or other sides heading into action.

Sophomore forward Calvin Harris looks prime to take another step forward in his second season playing for Wake Forest. He was at the heart of Wake Forest’s first two goals in last Friday’s 3-1 win against Louisville. The swift striker slipped in attacking counterpart Machop Chol for the game’s first, and then scoring what turned out to be the game-winning goal.

Check out our 3️⃣ goals and more from our victory over Louisville! #GoDeacs 🎩 pic.twitter.com/5nWPopNJm5

Below are some of the other top performances from last past week of action in men’s Division I soccer.

GK Nico Campuzano, Pittsburgh: The grad transfer gave up a goal from a nicely-taken Michael Pellegrino finish. He did make a save and ensured that nothing else found the back of the net as Pitt defeated Notre Dame 3-1.

D Robert Screen, Kentucky: Without conference action this fall, the Wildcats still have a busy schedule. Last Monday they handled Duke by a 4-2 score, with Screen notching a pair of assists.

D Aldair Cortes, Georgia Southern: While his side was on the losing end of a 3-0 result on Tuesday, they bounced back with a 3-2 victory over UAB. Cortes setup a pair of goals in the win.

D Jeryn Hodge, Georgia State: Only playing 23 minutes from the bench, Hodge’s slashing run from his right back spot, grabbing the second and winning goal in a 3-1 win over South Carolina.

M Nick Pariano, Duke: After making his first career start last Monday in a 4-2 loss against Kentucky, Pariano came off the bench to score the winning goal deep in the second overtime against NC State.

M Bertin Jacquesson, Pittsburgh: A strong start to his career at Pitt continued for the French midfielder, who bagged a goal and assist versus

M Ross Finnie, Georgia State: The central midfielder helped his side dominate the game against South Carolina. He completed 83% of 40 pass attempts, and won 71% of his challenges (14), while making three tackles and six interceptions.

F Calvin Harris, Wake Forest: Harris scored six times and added three assists as a freshman, and looks primed to take a step forward in his second season of college soccer. The combination of him and Chol up front are difficult for any back line to track.

F Alexander Dexter, Pittsburgh: With Edward Kizza dismissed from the program, Dexter becomes all the more important for Pitt’s chances of competing this fall. He stepped up in his first chance, scoring a goal and setting up another.