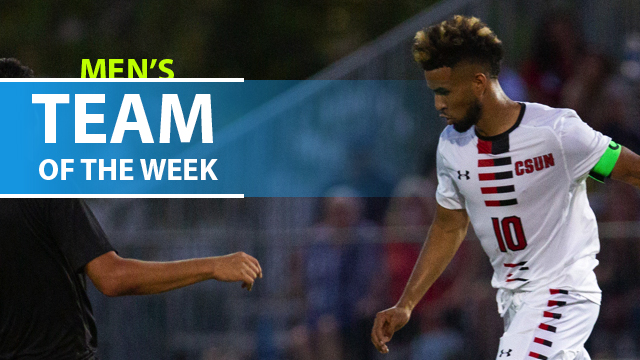 One of the hardest challenges of the college soccer season is making a long trip and then finding success.

Big West side CSUN traveled to Ohio for games on Friday and Sunday, and thanks to the first men’s Player of the Week, picked up two wins.

Junior forward Daniel Trejo assisted on the game-winning goal on Friday, as CSUN came back from a 2-0 deficit against Ohio State, defeating the Buckeyes by a 4-3 score in a wild game. In the second game, Trejo had a hand in all three goals in a 3-1 victory over Dayton. He scored two goals and had an assist in that game, as the Big West conference showed signs of promise over the week.

Below is the complete team of the week for the first few days of the men’s Division I college season.

GK Matthew Rosenberg, Xavier – A six-save effort helped Xavier secure an opening night upset at home, as they beat Akron by a 2-0 score on Friday night.

D Luke Hansen, St. John's – After getting limited run as a freshman, Hansen looks slated for a regular role this season. He played every minute for the Big East side, which enjoyed two wins from a road trip to North Carolina, including a 1-0 double overtime victory against NC State.

D Patrick Hogan, Charlotte – The junior defender anchored a pair of shutout wins against Gardner-Webb and High Point. He grabbed a goal as well in the 3-0 win over Gardner-Webb.

D Manuel Cukaj, Marquette – The Golden Eagles secured a win and a draw against UAB and UC Davis in the opening weekend. Cukaj scored the winning goal in a 2-1 victory against the CUSA side.

D Jon Ingason, Virginia Tech – Another team that made a cross-country trip and picked up two wins, the Hokies beat Loyola Marymount and UC Santa Barbara. Ingason played every minute of both games, scoring a goal in a 3-1 defeat of UCSB.

M Ryan Medilah, Florida Gulf Coast(m) – The senior midfielder had a huge game on Friday, scoring a hat trick (the sixth in FCGU men’s soccer history) that led his side to a 4-3 win against Michigan. Medliah also setup the winning goal in a wild game up in Ann Arbor.

M Gianluca Arcangeli, UCF – Coming off the bench against two ACC sides, Arcangeli scored goals against Wake Forest (a 2-1 loss) and North Carolina. The American Athletic side picked up a big 2-1 win over the Tar Heels.

F Anders Engebretsen, St. Mary's (CA) – As a team, the Gaels picked up where they left off in 2018. Engebretsen led them to a 2-0 win against UC Irvine, scoring both goals in the victory.

F Daniel Trejo, CSUN – An extremely productive player his past two seasons, Trejo’s off to another good start with two goals and two assists from the first two games of 2019.