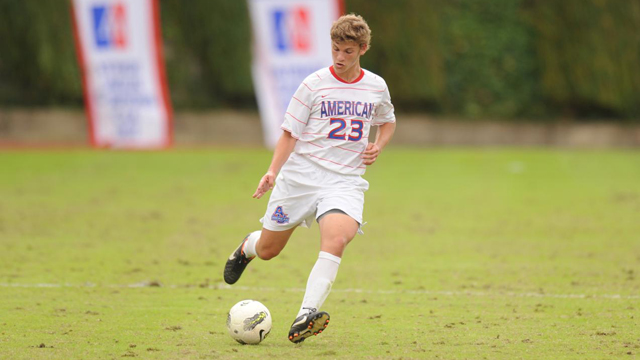 It was the weekend of the upset in men’s college soccer as the No. 1 team went down as well as a couple of others in the top ten. Some standout individual performances helped spur these upset bids over the course of the past week.

Check out which players made the TDS Team of the Week below.

GK Alex Bono, Syracuse: Bono recorded six saves on Thursday in a 1-0 win over Rutgers. He followed that up with a pair of saves against St. John’s in another 1-0 road victory. Bono is 4-0 with 360 minutes of shutout play under his belt to start the 2014 season.

D Luke Gearin, Lipscomb: Lipscomb improved to 3-0 on the season with many thanks to Gearin, as he scored both goals in a 2-0 road win over Evansville on Sunday. It was the first multi-goal game of the senior’s career at Lipscomb.

D Jake Weinreb, American: Weinreb was the key piece for American in a stellar weekend of action. American defeated UCLA 2-1 on Friday and then beat UC Riverside 1-0 in overtime on Sunday. Weinreb was named the MVP of the Grange & Ashwill Memorial Tournament.

M Lucas Baldin, South Florida: Baldin scored two goals against Akron to lead the Bulls to a 2-1 overtime win over the visiting Zips. He followed that up with a goal against Portland in a 2-0 victory as the Bulls were perfect on the week.

M Mamadou Kansaye, UMBC: Kansaye scored two goals including the game-winner in a 3-1 win over Appalachian State on Sunday. The senior also contributed an assist on the other goal in the game. Kansaye played all 110 minutes in the scoreless draw against Maryland earlier in the week.

F Andy Bevin, West Virginia: Over the course of three games last week, Bevin had two goals and four assists to lead the Mountaineers to a 2-1 record. The senior forward played 90 minutes in the 0-1 loss to St. Francis (Pa.) on Sunday.

F Lewis Hawke, Furman: The sophomore striker scored the game-winner for Furman against North Florida and Georgia State over the past week. For his contributions, Hawke was awarded the MVP of the Gray Griffin Memorial Tournament.

F Andy Craven, UCLA: Craven scored the game-winners against Old Dominion and VCU over the weekend as North Carolina improved to 3-1 on the season. Craven has the game-winner in all three victories for the Tar Heels this season.

F Sagi Lev-Ari, Cal State Northridge(m): The senior forward scored the game-winners against UAB and Tulsa as the Matadors picked up their first two wins of the season over the weekend. Lev-Ari’s game-winner on Sunday came in overtime, which was his fourth goal of the season.

F David Olsen, San Diego State: With only three minutes left on the clock on Friday, San Diego State was awarded a penalty kick. The score was 1-1 at the time and this was the deciding moment of the tilt. Aztecs freshman David Olsen stepped up and buried the shot for the game-winner. He followed that up with two goals (including another game-winner) against Denver on Sunday.