Men’s Team of the Week: September 21 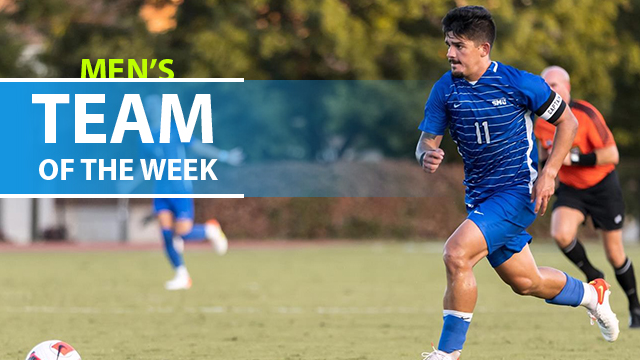 It’s been a superb start to the 2021 season for Gabriel Costa.

The Brazilian attacker continued to dominate in the final third, propelling SMU to another pair of wins.

Costa had a hand in six of the team’s seven goals scored against Incarnate Word last Monday and setting up four goals in the team’s American Athletic Conference opener against Temple over the weekend.

He scored and had an assist in the win over UIW, and then notched four assists versus the Owls.

See some of the other top performances from the past week of action in Division I men’s soccer.

GK Jacob Castro, San Diego State – A transfer to SDSU has been huge for Castro, who back-stopped two more clean sheets in Pac-12 play last week. Castro made two saves in a Thursday win against California, and then he made seven stops in a 1-0 overtime defeat of Stanford.

D Brandon Knapp, St. John's – Knapp made a huge push for Player of the Week honors in his own right. He scored the winning goal over the weekend in a 1-0 road win over Xavier. Along with that, he played the full 90 minutes in a Monday victory against Columbia.

D Ryan Sailor, Washington – The strong start to the season continued for the Huskies, which defeated a solid Utah Valley side by a 2-1 score away from home. Sailor bagged the winner for UW, which has started the season with five straight wins.

D Hamady Diop, Clemson – With two more wins and two shutouts, the Tigers continued to roll last week. Diop played all but 13 minutes in the victories, including a quality shift against Boston College.

D Garrison Tubbs, Wake Forest – After losing the conference opener to Louisville, Wake Forest bounce back in a big way last week. Tubbs scored a goal and anchored his side’s defensive effort in a 3-1 win over Pittsburgh.

M Sergi Martinez, Bowling Green – It was an excellent week for Bowling Green, which unseated formerly ranked squad Florida International by a 2-0 score on Saturday. Martinez had a goal and assist in that match, while also nabbing a goal in a 3-0 defeat of Wright State.

M Gabriel Costa, SMU – The Brazilian attacker is in ferocious form this season, building a national player of the year case. He now has six goals and five assists in six games.

F Pedro Fonseca, Louisville – A pair of goals and an assist by Fonseca were instrumental in Louisville’s crazy 5-4 win over Syracuse in overtime.

F Patrick Agyemang, Rhode Island – With a hat trick against Brown, and an assist in a big conference win over VCU, the strong season continued for both Agyemang and Rhode Island.

F Davis Smith, Providence – A goal and two assists by Smith helped Providence pick up a big win in the Big East opener against Seton Hall.