Men's Team of the Week: September 6 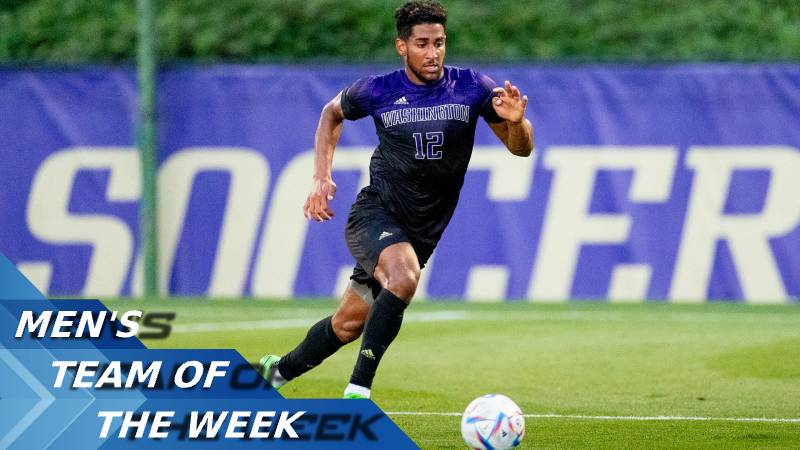 Ilijah Paul didn’t hesitate. With his Washington team up 3-0 and two goals to his name, there was little pressure to find the back of the net. Still, he finished confidently all the same, stroking the ball into the bottom corner, leaving the Utah Valley goalkeeper frozen to the spot.

His hat-trick sealing strike was the culmination of a silky performance from the forward. His first two goals were opportunistic things, all clever runs and neat finishes. That third, though, was an emphatic end to a career night. Paul’s emergence as a goalscoring threat — he now has four goals in three games — has been a major part of Washington’s strong start as it looks to make another College Cup run. A hat-trick every week seems unlikely, but if he continues to finish with such confidence, then those late season ambitions might be well within reach.

Here are the remaining top performers to round out our best XI.

D Alberto Suarez, Saint Louis - Suarez scored a crucial goal in the Billikens’ 3-2 win over Creighton Friday night. He also played all 90 minutes of the contest.

D Luca Dahn, Seton Hall - Dahn was immense at the back as Seton Hall held on for a 1-0 win at Oregon State. The Pirates have only conceded once in three games, largely thanks to his leadership.

D Nathan Simeon, San Francisco - The right back has been a reliable defensive presence in his first three years on the Hilltop. But he’s added more to his game this year, providing three assists. The latest, a lovely floated cross onto the head of Arjan Dosanjh, sealed a tough win over CSUF(m).

M Knut Ahlander, SMU - Ahlander’s goalscoring touch eluded him in 2021, as the midfielder only scored once in the fall campaign. This year, he’s already amended that, bagging three in three games. He was terrific against Central Arkansas, scoring both of SMU’s goals in a 2-0 win.

M Riley Ferch, UCLA - The midfielder scored twice and added an assist in the Bruins’ 5-2 win over Liberty, helping lift the team to a 3-0 record prior to Monday night's game.

M Antek Sienkiel, St. John's - Sienkiel made program history in the Johnnies’ 5-0 win over Lehigh, scoring the team’s first hat-trick in nearly 20 years. His performance was vital in overcoming a slow start to the season.

F Matthew Bell, Marshall - Bell’s brace against Pittsburgh brought the Herd one of their biggest home wins in recent memory. Both goals were wonderfully taken, epitomizing Marshall’s ruthlessness on the night.

F Stephen Afrifa, Florida International - Afrifa bagged a brace to lead FIU to a 2-1 win over UNC. He was a constant threat for the Panthers and could’ve scored a couple more.

F Ilijah Paul, Washington - A big breakout from Paul would be massive