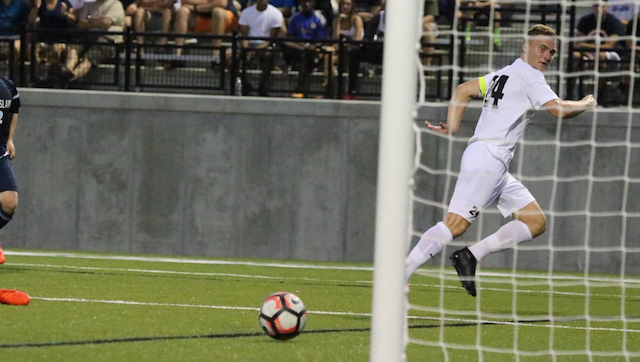 The Second Round of the NCAA Tournament is in the books and there are still two darlings left at the dance. Providence pulled off one of the great upsets in college soccer lore on Sunday to knock off No. 1 seed Maryland. SIUE advanced from the first two rounds of the tournament through penalty kicks as the Missouri Valley Champions upset Michigan State and Butler.

The Friars and Cougars are into the Sweet 16 thanks to some tremendous individual performances along the way. Check out who made the cut for the TDS Team of the Week below.

GK Kyle Dal Santo, SIUE - Dal Santo was in goal for both of the penalty kick wins for the Coungars. He made the diving save on the last penalty kick on Sunday as SIUE beat Butler and advanced past the Second Round for the first time as a program in Division I. Dal Santo recorded five saves in the scoreless shutout. He also recorded six saves in the 1-1 result against Michigan State.

D Billy McConnell, Indiana - The senior defender scored the only goal in the Hoosiers 1-0 win over Akron in the NCAA Second Round battle. McConnell was also an instrumental part of the team that shut out the potent Zips’ attack on the day.

D Tomas Hilliard-Arce, Stanford - The Cardinal center back proved his value once again with a great goal on a header off a corner kick to seal the win against Pacific on Sunday. Hilliard-Arce and the Cardinal defense held Pacific to only two shots on goal in the 2-0 win.

M Julian Gressel, Providence - Gressel scored one goal on Thursday in the 2-0 win over Delaware in the NCAA First Round. He added two more goals on Sunday in the wild 5-4 win over Maryland.

M Nico Melo, North Carolina - Melo was the runner-up for the Player of the Week honors. The North Carolina midfielder finished the game against Florida Gulf Coast with three assists. Melo helped spur on the attack that registered 17 shots in the second half against the Eagles. The Tar Heels ended up walking away with a 3-2 win in double overtime over the Eagles.

M Jacori Hayes, Wake Forest - Hayes notched the game-winning goal against Coastal Carolina on Sunday. Hayes scored in the 20th minute off of an assist from Ema Twumasi. It was Hayes’ eighth goal of the season.

M Alex Underwood, Denver - Underwood recorded a goal and an assist in 61 minutes of work on Sunday. Underwood helped lead the Pioneers to a 3-0 win over UNLV in the Second Round game and send the only undefeated squad left in Division I into the Round of 16.

M Sergio Camargo, Syracuse - The senior scored twice and added an assist in the 3-0 win over Dartmouth on Sunday. Camargo helped open up the Big Green defense early and then finished it off late to lead Syracuse into the next round.

F Tate Schmitt, Louisville - Schmitt scored a great header in overtime against UCLA to help Louisville advance to the next round of the tournament. The sophomore forward drifted off his mark and then rose up to direct Danny Reynolds’ cross into the back of the goal for the game-winner.

F Scott Menzies, Washington - The redshirt sophomore came off the bench for the Huskies and scored the game-winning goal and then added an assist on the insurance goal. Menzies offensive outburst allowed Washington to claim a 4-1 win over New Mexico in the Second Round game in Seattle on Sunday.

F Nico Quashie, Virginia Tech - Quashie scored the game-winner in both of Virginia Tech’s wins last week. He netted the game’s only goal in the 1-0 win over East Tennessee State in the First Round. He scored late in the 3-2 win over Charlotte in the Second Round. He was the supersub in both games.