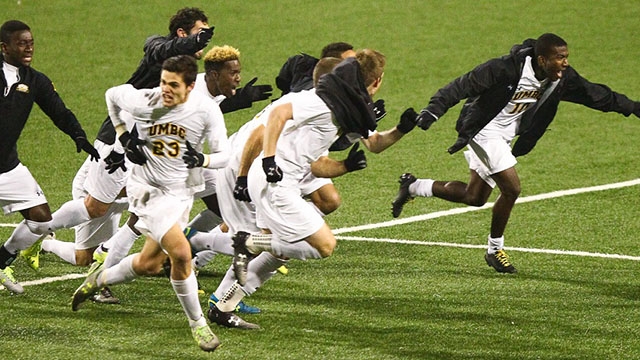 It’s done to the Final Four. The men’s college soccer season heads into its final weekend of play with only four teams left standing.

With three of the four quarterfinals going to penalty kicks and only one goal deciding the other game, there was very separating the teams as the tournament nears it conclusion.

No. 1 UCLA held on against North Carolina in Westwood to advance to College Cup after a 7-6 win in penalty kicks. The Bruins retain the top spot and head to Cary, North Carolina with the highest remaining seed (No. 2).

Providence was the only team to win in the quarterfinals in regulation. The Big East program defeated Michigan State 3-2 on Saturday to clinch its first trip to College Cup. Providence checks in at No. 2 this week and takes on UCLA in the semifinal.

Virginia went on the road and knocked off Georgetown to advance to its second straight College Cup. The Cavaliers scored a late equalizer and then won 5-4 in penalty kicks against the Hoyas. Virginia checks in at No. 3 this week.

Cinderella story UMBC rounds out the top four. UMBC defeated Creighton in penalty kicks after a scoreless draw over 110 minutes. The lone unseeded team remaining became the first program to advance to College Cup after winning four games on the road. The Retrievers have not allowed a goal during this incredible NCAA Tournament run.