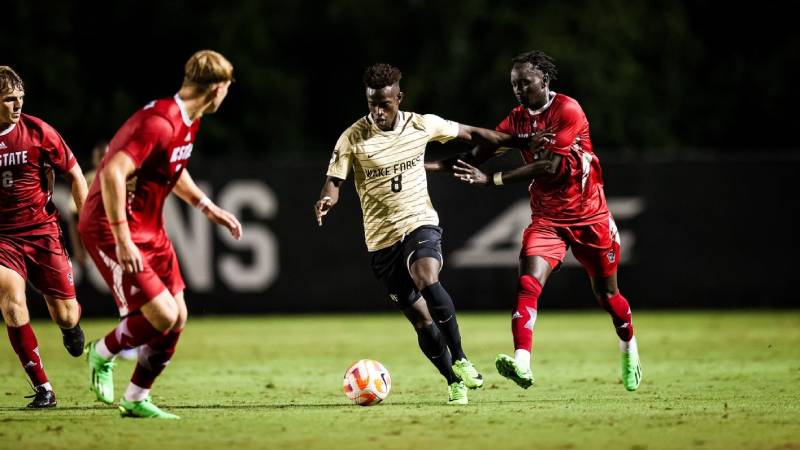 It’s been a good seven days for strikers. Levonte Johnson, Stephen Afrifa, Matthew Bell and Alex Willis have all found the net with regularity as the season picks up — carrying their teams to big wins. And all four will need to perform again this week, faced with the challenge of once again leading the line against a tough opponent.

Three of them — Bell, Willis and Afrifa — are involved in some of the week’s most important matches, major clashes that could have significant implications in conference standings. Here’s a look at five big matches this week, and how those high-scoring forwards might affect the final result.

FIU(m) has proved that it likes an upset. And although SMU has endured a mixed start to the season, it will still likely be favorites headed into this AAC contest. For FIU, it all starts with Stephen Afrifa. The forward has been a menace so far this season — especially in big games. His five goals — four of which have come against ranked teams — have been vital in carrying FIU to a winning start. SMU, meanwhile, hasn’t won either of its last 2 matches, notably falling 1-0 to Memphis on September 17. This game, then, represents a chance to turn things around and get back to winning ways in the AAC.

Any fears that Clemson might suffer after losing to Syracuse were quelled by a 4-0 thrashing of Presbyterian. Saturday, though, the Tigers will face another tough ACC contest, facing No. 1 ranked Wake Forest at home. This matchup delivered in a big way last year, when Clemson completed a second half comeback after trailing 1-0. Wake Forest is an improved side this campaign, winning all eight of their games so far. But it is also yet to be truly tested, with no ranked wins on the resume. Saturday, then, should be a real indicator of where exactly the Deacons are.

Last time these two sides met, a record 3,033 fans packed into Hoops Family Field to witness an enthralling 2-2 draw. That mark is set to be smashed for another installment of this gripping derby. The Herd enter the game with a 4-1-1 record, with a win over then-No. 2 Pitt(m) on their resume. More recently, they snatched a 1-1 draw in Kentucky after a gripping 90 minutes. West Virginia hasn’t enjoyed the best start, with losses to Pitt, Penn State, Portland and Yale contributing to a 2-4-1 record. The Mountaineers will have to control the dangerous attacking duo of Bell and Milo Josef to stand any chance — the two have combined for 11 goals so far. Still, anything can happen in a derby. Regardless of the teams’ records going into the contest, this will be an entertaining encounter.

Santa Barbara tooled up nicely before the season, bringing in some smart transfers to supplement a solid spine. And it’s worked out for them in the early goings, as the Gauchos have beat LMU(m) and Oregon State, while also notching respectable ties against Missouri State and Grand Canyon. They’ll look to hold on to that form against a testy Stanford side. The Cardinal have tied their last three, but were unlucky not to snatch all three points in their Pac 12 opener against UCLA. An improved performance seems likely, making for an enticing matchup against a quality Gauchos team.

After beating Coastal Carolina, Charlotte is officially off to its best start in program history. There’s a lot to like about this team. Kevin Langan has recruited and molded a high scoring team, loaded with attacking quality and pace. The 49ers love to play on the break, and can hurt anyone on their day — especially when they find Willis in good areas. Tulsa presents a real challenge, though, especially in Oklahoma. The Hurricanes are coming off a convincing 3-0 win over a ranked Missouri State side. Alex Meinhard led the way that night, and appears to be rounding into form right as conference play starts. That’s bad news for opponents, as the forward is among the best in the nation when he’s in form. Stopping him will be key if Charlotte is to extend its unbeaten run.