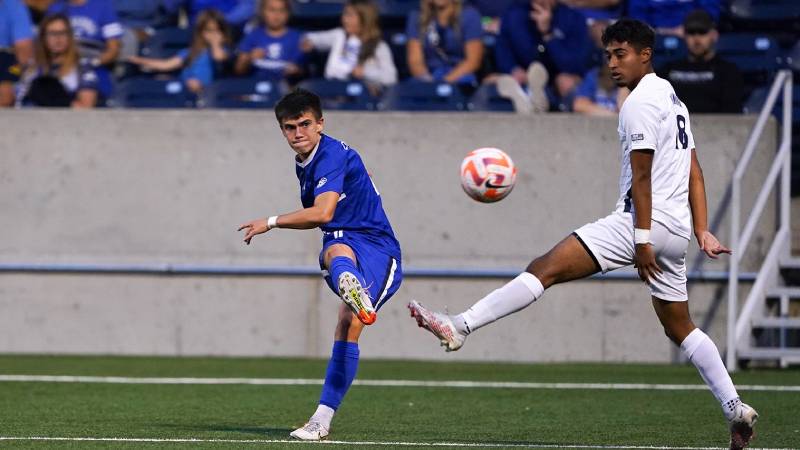 While the men’s top 10 is starting to become well defined, the conference picture looks murkier. While there are certainly favorites, a whole bunch of contenders will look to push towards the top of their league — or even sneak into the conference tournament. This week might offer a little more clarity as to who has the quality to push to the top of their conference, as a number of potential winners square off. Here’s a look at five of the best games.

Washington is yet to lose this season — and has navigated all of its trickier matchups so far. In Nicholas Scardina, Ilijah Paul and Lucas Meek, they have three of the best attacking players in the country. But an in form Stanford side could cause the Huskies some problems. The Cardinal have been excellent defensively this season, only conceding four goals so far. And they can score, too, with a number of attacking options capable of finding the back of the net. Washington will be favorites on the night, but an upset certainly isn’t out of the question.

Clemson’s strong start was marred by a blowout loss to Wake Forest back on September 24. They’ve righted the ship since then, edging UNC(m) at home for a vital ACC win. But the games don’t get easier — especially against a good Pitt side. The Panthers lost last time out, outgunned by Virginia. Still, they don’t lose many games under Jay Vidovich, and dropping two on the bounce would be a real surprise. Clemson should expect a resurgent performance from a team in real need of an ACC win.

The ACC never seems to calm down. Wake Forest and Syracuse — early season conference leaders — both lost last week, dropping games to Duke and Cornell. While they both still hold winning records in conference play, neither team can really afford to drop any more precious ACC points. Syracuse will hope that its early season magic continues. With Russell Shealy performing well in goal and Levonte Johnson finding the net, the Orange have looked a really good team. But they will have a tough time against Wake Forest’s high scoring side. Babacar Niang has been excellent of late, establishing himself as one of the conference's best attackers after sitting out most of 2021 through injury.

It's early in the Ivy League race, but Saturday is a big matchup in the chase for the regular season crown. Cornell comes into this one fresh off a big upset against Syracuse, a massive result to boost the at-large resume. There is ample attacking depth, including Brandon Morales, Alioune Ka, Emeka Eneli and Mukisa Kiingi. It's been a relatively positive start to the season for Brown under new head coach Chase Wileman; a win here would be another massive boost and give Brown a real chance of competing for the Ivy title.

Can the Pilots parlay a sensational non-conference run into a WCC title? The Pilots have hit their stride this season, winners of four straight and undefeated in 10 games. Brandon Cambridge has taken a big step forward, a crucial player in the attacking third, while Sebastian Nava and CJ Tibbling are impressive compliments. After a solid performance outside the WCC, the Dons dropped the first games in league play against LMU. A win here would rectify that and inject themselves into the race.