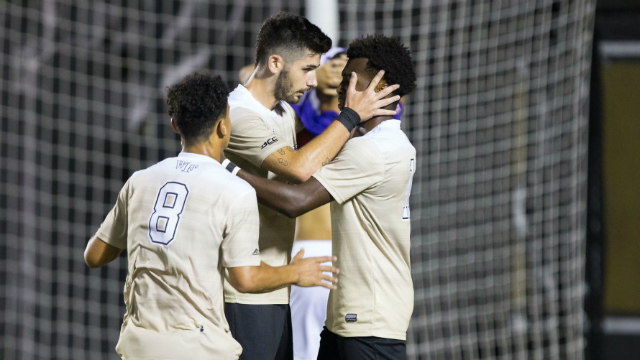 The top five matches of the weekend are below.

By far the most compelling matchup of the season, the Tigers need a road victory in order to close the gap in the Atlantic Conference on Wake Forest. The two sides have impressive winning streaks, as the Demon Deacons have rattled off six straight and Clemson are winners of four. Jon Bakero is building a strong case for Player of the Year honors, scoring six and setting up 10 at this point in the season. He drives a potent Wake Forest attack that peppers opposing goalkeepers. Ximo Miralles is plenty capable of standing his ground in goal, and senior forward Diego Campos is impressive enough in his own right. Whatever happens, this game is must-see TV.

Two losses in a row count as a slump for any high-level program, and the Irish have dropped games to Virginia Tech and Indiana heading into Friday’s arrival of UVA. Silver lining to those defeats is that both were away from home, and the Irish are back at Alumni Stadium for the arrival of a quality Virginia squad. Jon Gallagher and Jeffrey Farina remain Notre Dame’s best bet to create havoc in the final third, and the matchup against the three-man back line of Virginia should be intriguing. The Cavaliers have been hit or miss despite their impressive record, needing last-gasp goals to maintain their momentum. Edward Opoku’s been a menace up front once again, leading the team in five goals. This is only the second road game that Virginia’s faced all season, and a win would reinforce the suggestion that they could compete for conference and perhaps even national honors.

The third Top 10 clash of the weekend in the ACC takes place in Durham, as a revitalized Duke side looks to keep rolling against the Cardinals. Forward Brian White leads the charge, as his excellent summer carried over into six goals from the first nine games of the season. Markus Fjortoft anchors the back line, and has chipped in three goals from set piece situations. Louisville’s successes have been familiar: goals chipped in by Tim Kubel from his outside back spot, Tate Schmitt emerging as a force in the final third, and a solid defense in front of goalkeeper Jake Gelnovatch. Getting Mo Thiaw rolling in this will help Louisville stake a claim for an ACC crown, and they’ll look to do just that on the road.

Michigan State’s unbeaten start to the season finally came to a close on Wednesday night, as the Spartans lost 4-1 on the road against Akron. It was even more of an anomaly considering that Michigan State conceded just one goal heading into that mid-week matchup. Being back at home in Lansing is sure to help, and getting the offense going is sure to be a priority, as MSU has just 10 goals despite its impressive start. Ohio State’s emerged with a 3-0 record from the softer portion of the Big Ten schedule, as Parker Siegfried’s been very good in between the posts, while Abdi Mohamed’s emerged as a force up front. A low-scoring draw is a good bet here, as neither side is going to seek to sit deeper and concede very little in front of its own goal.

Through the team’s first six games of the season, UCLA has shown flashes of its perennial status as a power, but inconsistency plagued them in a tough non-conference schedule. Midfielder Brian Iloski’s accounted for half of his team’s 10 goals, though three of the five have come from the penalty spot. Freshman Santiago Herrera’s been a solid addition as well. Whether or not the Bruins have the talent and ability to beat Stanford – even at home – is the big question. Tomas Hilliard-Arce leads the team’s imposing defense, while Foster Langsdorf started quickly before cooling off of late. Stanford’s dominance in the Pac-12 doesn’t seem close to an end, though UCLA will look for the confidence boost a win would provide.