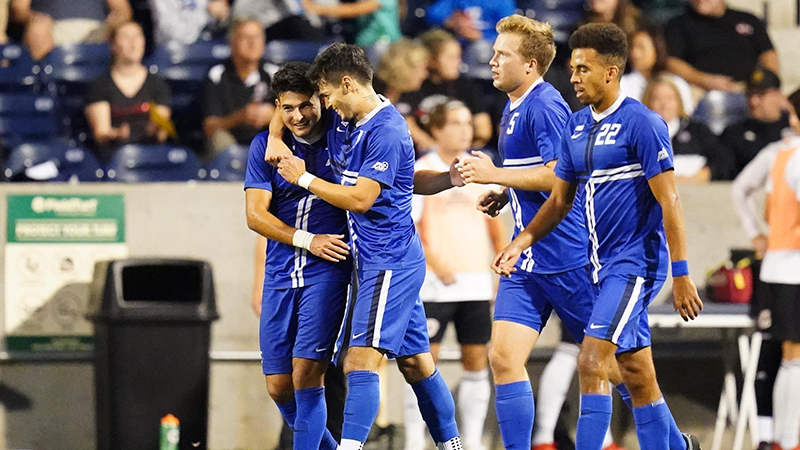 Big games are on the horizon, as the ACC tournament continues and Big East tournament begins. Crucial deciders are also on the schedule to watch in the Conference USA and WCC. Don’t miss these five games.

The Conference USA regular season title will either head to Florida or stay in West Virginia, before Marshall heads to the Sun Belt in either 2022 or 2023. FIU’s impressive season means that a win or draw secures the regular season crown, as the Panthers enter this game with a two-point lead at the team. There are plenty of parallels between the two teams: both lean on internationals, and can control games to limit opposing chances. Stephen Afrifa’s been a key player for FIU in the final third, leading the team with seven goals. Capitalizing on chances will be a big part of this game, as Marshall can get goals from various sources, whether that’s Pedro Deolabella, Vinicius Fernandes or Vitor Dias. It will be fascinating to see how the game plays out considering the circumstances.

Win and they’re in. That’s the job ahead for Santa Clara, which built off a strong spring season and carried that over into the fall. A victory here would secure first place in the WCC for the Broncos, a first since 2015. Forward Oladayo Thomas leads the WCC with eight goals, while Javier Ruiz Duran’s eight helpers a big part of the team’s offensive success. Experience is at a premium, as nine seniors will be honored in this one on senior night. Portland needs the win here in order to keep pace in the conference race, currently trailing Santa Clara by three points. Currently at No. 30 in the RPI, the Pilots will be on the bubble for an at-large bid, and even a draw would help them avoid a dip in that regard. Unbeaten in the last five games, including four wins in that stretch, has Portland peaking at the right time. Keeping this game close will be important in that regard.

The quarterfinals of the men’s ACC tournament serve up some scintillating clashes, and this all-North Carolina matchup stands out as perhaps the best. Wake Forest dominated Virginia, despite a handful of key contributors missing due to the flu. Kyle Holcomb continues to excel down the stretch, hitting his ninth goal of the season. Big games are needed from Omar Hernandez as well, while the center back duo of Nico Benalcazar and Prince Amponsah are also crucial. The focus will be shutting down Duke forward Thorleifur Ulfarsson, who leads the team by far with 11 goals. Peter Stroud can help win the midfield battle, which would go a long way against Wake. The Duke back line hasn’t been as imperious in October, meaning Holcomb and the other Wake forwards should get chances. A high-scoring, entertaining game here seems likely.

It’s been a great season for the Big East, even if difficult to catch without an ultra-expensive Flo Sports subscription. As many as five at-large bids could be in reach for the conference, with four relatively locked in: Providence, St. John’s, Georgetown and, after winning a mid-week game, Creighton. The Blue Jays could still miss out in theory, especially if they lose to Villanova. In one way, the winner of this one has the best shot at making the full NCAA tournament, as the winner faces Georgetown, another high RPI program. Just as their season looked to veer off the rails, Creighton spun off four straight wins, and are six unbeaten overall. After deciding to return, Diego Gutierrez has proven his quality again, scoring nine goals and setting up six more. He’ll be crucial against Villanova. In the same way, Lyam MacKinnon and his seven goals, paired with five assists, makes him the most important offensive player; he’s been involved in 12 of the team’s 20 goals. A road win at Creighton is a tough task, and having lost 4-2 at home to the Blue Jays earlier in the year, isn’t a positive sign for the Pennsylvania program.

With the Pacific Northwest sides swinging to Southern California, it’s a decisive stretch for the Pac-12 race. This matchup is also a massive chance for UCLA to secure an at-large bid and return to the NCAA tournament. Winning against the No. 1 RPI program would bolster the Bruins’ chances. They’ll need to unlock an inconsistent attack in order to do that; Tucker Lepley, Kevin Diaz and Tommy Silva all lead the way with four goals apiece. The Beavers have the attack to do damage, whether through Tyrone Mondi, Sofiane Djeffal or Adrian Molina-Diaz. Oregon State has already secured a share of the Pac-12 title, and can pull further ahead with a win or draw here. A team that always likes to get forward, Oregon State has also shown a bit more defensive nous to keep things tight at the back than they did in the spring.