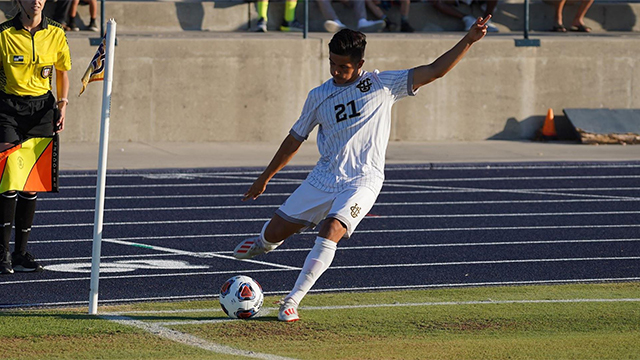 As the second week of men’s Division I college soccer rolls right along, several of this weekend’s best matches include Big Ten sides facing tricky tests.

Below are five key games to track on Friday.

IU and Denver kick off the Mike Berticelli Memorial Tournament on Friday in a game that unfortunately will not televised. It’s the next step for an IU team retooling with one of the top recruiting classes, picking up a pair of overtime wins against Pitt and UCLA last weekend. Freshmen Joshua Penn, Aidan Morris and Victor Bezerra all saw significant minutes in those wins. But Ian Black, one of several returnees, scored big goals, as did defender Jack Maher. Denver pays a visit after a tough road trip to the Pacific Northwest that saw them lose and draw at Washington and Seattle respectively.

Can the Huskies make a push in the Pac-12? Obviously this doesn’t represent a conference clash, but it’s a tune-up on the road against a Top 10 opponent, which will serve as important preparation for chasing Stanford. The firepower Blake Bodily and Gio Miglietti showed in their first two wins (2 g, 1 a each) is the start needed for a team that should be difficult to breakdown as usual. Goals may be hard to come by in Lansing, as the Spartans are generally defensively solid. They are rebuilding their attack after losing key pieces Ryan Sierakowski and DeJuan Jones from last year’s squad. Farai Mutatu’s one to watch in that regard, while Giuseppe Barone can provide midfield control.

Two winless teams meet in Omaha in a marquee matchup of two teams searching for a first win of the season. The Zips were unable to find a result on the road against Xavier, and then couldn’t solve Andrew Thomas before conceding a late goal at home against the Cardinal on Monday. Finding an option beyond David Egbo is important for success both here and the rest of the season. Injuries have ravaged the Bluejays in their first season under head coach Jonny Torres. That being said, they gave a good account of themselves on a tough ACC road trip, drawing 2-2 against UNC before losing 1-0 to Wake Forest after having a good goal ruled out in the first half when it was 0-0. It’s going to be a tough one for Akron to find a win.

While it’s hard to imagine these two perennial powers going on deep NCAA tournament runs, the early stage of the season makes it a fascinating one. The Terps showed in Monday’s 2-0 loss against Virginia at Audi Field that they have a long road ahead. Missing sophomore William James Herve through injury isn’t easy. UCLA showed signs of life last weekend, splitting a pair of games in Bloomington, giving Indiana plenty to think about in Monday’s rescheduled matchup. A win against the defending champions would be a nice feather in the cap for Ryan Jorden in his third regular season game in charge of the Bruins. Milan Iloski’s already reinforced how crucial he’ll be to the team offensively, scoring the winner against Northwestern and setting up UCLA’s lone goal in Monday’s 2-1 defeat in overtime versus IU.

Two programs with high expectations for the 2019 season square off in California. The Hoyas held serve during Labor Day, notching wins against Syracuse and Temple to get off to a positive start. Freshman Dante Polvara’s injected some quality into Georgetown going forward, and at 6-foot-4 provides a big presence centrally. Rebuilding the team’s back line, particularly in central defense, will be pivotal here. UC Irvine will be without freshman star Kwame Boateng, who is off with the U.S. Under-20 MNT for a tournament this weekend in Slovenia. Improving in the final third is the immediate focus and obviously crucial for UC Irvine to pick up the win here after scoring just once in their first two games.