Four games this weekend feature two teams ranked in the top 25, which is a relief considering the lack of high profile fixtures last week.

The main story of the weekend comes from Berkeley, Calif., where Washington takes on California in a matchup of two top five teams.

The rest of the schedule is littered with quality fixtures, with key matchups in the Big Ten, Atlantic 10, and Atlantic Coast Conference all upcoming this weekend. 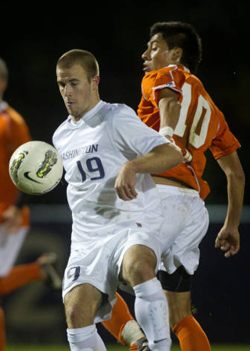 Check out a breakdown of some of the games to watch below.

There is a massive Pac-12 showdown this weekend and it does not involve UCLA.

Those are a few words that are not normally written.

The California Golden Bears are hoping to extend their undefeated record on the season into conference play with the opener on Thursday against Oregon State and then the top five showdown on Saturday against the Huskies.

Last season, the teams battled to a 1-1 draw in the meeting at Berkeley with Tony Salciccia and Ben Fisk scoring the goals for their respective sides. These squads are different this year though.

Cal is a challenger for the conference and national crown thanks to the return of Steve Birnbaum. The fifth-year senior has been a handful on set pieces in the attack, as well as one of the best defenders in the country.

Washington is entering its third Pac-12 season with Jamie Clark manning the ship. The Huskies have steadily improved with each season. This weekend will be a big challenge for Clark’s group with a clash against a quality Stanford side on Thursday before the big game on Saturday.

There isn’t much that separates these two sides. California has a bit more experience in the attack with Luis Fuentes already battling through one season of Pac-12 play as the No. 10 for the Golden Bears. He will be tasked with creating the opportunities for striker Stefano Bonomo.

Washington is much better on set pieces with long throw expert Michael Harris still taking on the role of a thorn in the side for Pac-12 opposing coaches. Cal will need to limit Harris’ chances from restarts.

No. 18 Clemson (7-1-1) vs. No. 2 Notre Dame (4-0-3) – This is the hardest stretch of the season for the Tigers over the next 12 days with games against Notre Dame, North Carolina, Wake Forest, and Furman. A win on Saturday over the Irish would be huge for confidence heading into that run.

No. 11 Northwestern (7-1-0) vs. Michigan State (6-1-1) – Two teams playing some of the best soccer in the country right now square off in Evanston on Sunday. Hopefully, Wildcats fans aren’t too exhausted from Saturday’s football game against Ohio State because this Big Ten soccer fixture could use the crowd as well.

No. 23 VCU (3-4-1) vs. No. 20 Saint Louis (5-2-0) – VCU has played one of the hardest schedules in the country so far this season, which deserves some credit for the A10 squad. However, VCU needs to start picking up wins in order to justify the quality of the schedule. A tough clash against SLU is the first order of business for VCU this weekend.

Virginia (5-3-1) vs. Pittsburgh (0-5-2) – Virginia is turning into a finely tuned machine of destruction rolling down a hill at ACC competition. Pittsburgh is still trying to get its first point in ACC play. The Panthers have kept it close in their previous four conference games, but close only counts in horseshoes and hand grenades.

Evansville (6-2-1) vs. Drake (4-3-2) – After starting the season 0-3-1, Drake is undefeated in its last five and riding a 380-minute shutout streak into Saturday’s game against Evansville. The Aces are rolling too, with five wins in a row and an offense that looks unstoppable. The Missouri Valley Conference tilt will be one to watch on Saturday.