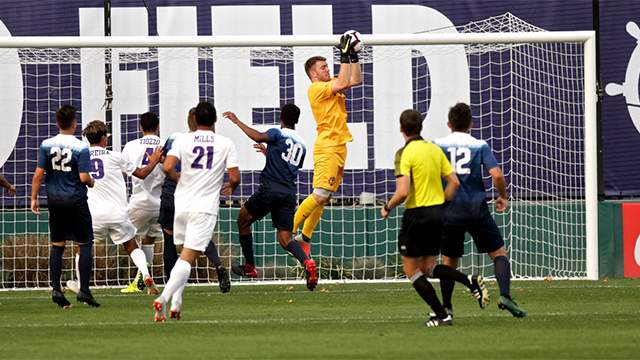 The anticipated arrival of Hurricane Florence to the Carolinas has wiped nearly the entire ACC weekend slate from the schedule, as well as a handful of other games.

These five games are worth keeping an eye on over the next few days.

On Wednesday it was announced that this match would be moved up to a 5:30 kick off on Friday. That seems to suggest that despite the possibility of plenty of rain in Blacksburg, this game could go ahead as planned. It should be a good matchup, as the Demon Deacons get a big road test against an organized and determined Virginia Tech outfit. The Hokies have 10 goals in six games, conceding just five during that stretch and certainly have the personnel to frustrate Wake’s flowing attack. The Demon Deacons have plenty of weapons, as Bruno Lapa, Omir Fernandez and Justin McMaster are evolving into a big three in terms of showing up on the scoresheet. Expect this to be another close game, like Tech’s opener last weekend against Virginia.

With Ivy League teams starting a week later, the Big Red have done well with three wins from its first four games. Despite losing on Monday to Syracuse, Cornell’s confidence should be in a good place for this trip west. Three players – Charles Touche, Emeka Eneli and John Scearce – have scored twice through the opening four games, and all are emerging as key offensive options. Obviously, this trip is sure to tell a lot about what Cornell’s ceiling might be, as CSUN should provide a significant test. Offense has been a big part of the Big West side’s promising start, with Daniel Trejo, Johnny Rodriguez and Khalid Hunter among the goals.

Arguably the best match of the weekend, UW hits the road for a tough test against a quality Portland side. The Pilots have been humming through a pair of its experienced leaders: Rey Ortiz and Benji Michel have kept the attack clicking. Freshmen midfielders Greg Tracey and Jake Arteaga have produced an instant impact in their first season in college, and the demands of Washington’s style is sure to provide a big test. Kyle Coffee, Joey Parish, Scott Menzies and Jaret Townsend are a handful to deal with going forward, and the Huskies offense has been clicking even with minimal influence from Blake Bodily. Quentin Pearson’s organization and leadership is crucial, and his matchup against Michel could be a determining factor in who wins.

The Big East joins conference fray this weekend and the nation’s capital hosts the most intriguing matchup over the next few days – provided it doesn’t rain too much. Georgetown is showing signs of being a force in the conference again. Goalkeeper Giannis Nikopolidis has taken over as the No. 1 choice on the Hilltop, while Derek Dodson and Achara have combined for six goals. Unbeaten in their first five games, scoring goals has been the issue for Xavier – all three of their ties are of the 0-0 variety. That’s a sign of a good defense, but if Georgetown finds a way in, it could be troublesome for the visiting side.

Like the Big East, the Big Ten opens conference play this weekend. While the records and ranking may not reflect that this match is going to be close, the Badgers do have the talent to trouble the Hoosiers. Provided the hosts can handle Indiana on set pieces, the likes of freshmen Andrew Akindele and Charlie Spragg are talented but still adjusting to the college game. Mitch Guitar, Noah Leibold, Isaac Schlenker and Dean Cowdroy have played every minute of the game and must bring it to come up with the upset. IU will be back at full strength after Griffin Dorsey returned from U.S. U20 camp ahead of Tuesday’s win against Notre Dame. The Hoosiers are a mix of higher-end potential pros like Dorsey, Justin Rennicks, Andrew Gutman and Trey Muse, and excellent college talent that includes Francesco Moore and Jeremiah Gutjahr. An upset for the Badgers would certainly be an interesting way to open the Big Ten season.