Messiah women on the march in DIII roundup York (Pa.) men bring the fireworks in a 2OT win over Christopher Newport 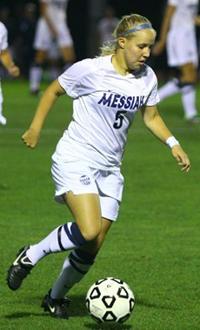 There wasn’t a more exciting game on offer over the weekend than York’s wacky 2-1 win over Christopher Newport in York, Pa. on Saturday afternoon. York has been riding a wave of optimism lately, and a climb to No. 9 in last week’s rankings buoyed what’s been a great year in south-central Pennsylvania. Another big game on Saturday certainly added to it.

Christopher Newport took an early lead in the first half, and York had to scramble to find the equalizer late in the game. It finally came on a Taylor Brummitt goal from 30 yards with just four minutes left in regulation. The teams grappled into the second overtime when Justin Kaiser knocked in the game-winner for his first career goal on just his sixth career shot. The win will undoubtedly give the Pennsylvania program some ammunition as it plunges further into the Capital Athletic Conference with a 2-0-0 record.

Messiah women continue charge back up the mountain

As the reigning national champions, Messiah has had a bumpy road to start the season. The Falcons dropped all the way out of the top 10 earlier this season after a pair of losses, and they’ve had to claw their way back into top-10 contention with each passing game. All that seems to be distant history now.

Messiah climbed to No. 8 last week, and the Falcons backed it up with a salty 2-0 win over Lebanon Valley over the weekend with goals from Nikki Elsaesser and Corinne Wulf. That win pushed Messiah to its sixth consecutive shutout on the season as Messiah moved to 8-2-1 overall. It was Messiah’s eighth shutout overall and it kept the Falcons in the national conversation for another week. Whether or not Messiah can keep this going or not will be of huge interest in the DIII world.

If you’re a peruser of TopDrawerSoccer.com’s 91st Minute blog, you no doubt caught JoJo Schmidt’s outlandish curling goal in our college goal of the week segment. Schmidt’s strike was more than just lip gloss. It was the jumpstart to a huge, game-changing 3-1 win over Simpson.

Iowa squad Loras entered its midweek contest against Simpson last week in a precarious place. The Duhawks were ranked No. 4 but were coming up against a Simpson team that was as hot as any in the nation. Simpson started the year on a nine-game unbeaten run, the best such run to start a season in program history. That all came crashing down with Schmidt’s strike, which gave Loras a first-half lead it didn’t relinquish. Simpson got as close as 2-1, but Loras got a late insurance goal to streak to 9-0-2 and 2-0-0 in the Iowa Conference. It wasn’t all gravy, though, as Loras dropped a league game to Wartburg on Saturday to lose its first game of the season.