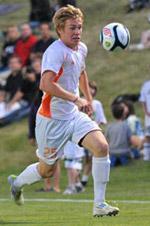 TAMPA, Fla. – The PDL announced its Team of the Week for the third week of the season, with Michigan Bucks forward Zach Steinberger being honored as the Player of the Week. Steinberger played a role in all five goals for the Bucks in their 5-0 win against the Chicago Inferno, recording a hat trick and two assists, to lead Michigan to victory in the opening game of its PDL season.

Steinberger opened the scoring for the Bucks in the 19th minute, firing home from the top of the penalty area from a pass by Adam Montague. Steinberger then assisted on a pair of goals by Montague in the final five minutes before the break, giving the Bucks a 3-0 halftime lead, before finding the net again himself just before the hour mark, volleying home a finish from Stewart Givens’ long throw-in. Steinberger capped his performance with 18 minutes to go, completing his hat trick.

Steinberger was joined in the Team of the Week’s attack by Billy Forbes of the Southern West Virginia King’s Warriors, who had a pair of goals in his side’s season-opening victory against the West Virginia Chaos. Victoria’s Brett Levis completed the trio, scoring twice as the Highlanders took their third consecutive win to start the season with a victory against the Sounders FC U23.

Defensively, Oklahoma City FC’s Scott Parkinson earned selection after scoring in his side’s first victory in club history. Des Moines’ Taylor Diem, who scored the only goal and was a force defensively for the Menace in their 1-0 win against Winnipeg, also earned selection, as did Ido Ligety, who played a key role in the Jersey Express’ 2-0 win against the F.A. Euro – New York Magic. Orlando City U23s’ Kyle Fisher rounded out the quartet, scoring in his side’s 3-1 win against IMG Academy Bradenton, while Laredo’s Emmanuel Frias took the goalkeeping honors after recording a shutout in the Heat’s 2-0 win against West Texas.