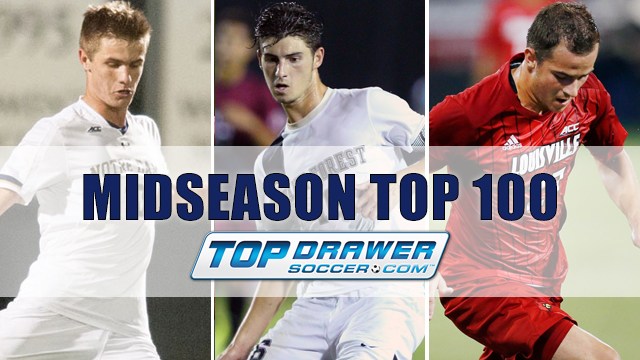 A disappointing start to the season for many of the preseason favorites made the midseason update to the TopDrawerSoccer Top 100 Men’s Division I players feature a number of new names.

Notre Dame star defender Brandon Aubrey grabbed the top spot in the TDS Top 100 Players midseason update. Aubrey has played 1206 minutes this season for the Irish, which are 10-2-1 on the season. The center back has eight goals and one assist in 13 games.

Fellow ACC defender Miles Robinson checks in at No. 2. Robinson, a sophomore standout for Syracuse, missed a couple of games this season due to youth national team duty with the U.S. U20 Men’s National Team. Robinson has four goals in 11 games this season. Syracuse has only conceded six goals in the games he has played. The Orange record with Robinson in the lineup is 9-1-1.

Louisville wingback Tim Kubel checks in at No. 3. Kubel has played 1196 minutes this season for the Cardinals. He has eight assists this season. Kubel and the Louisville defense have only given up eight goals this season.

Wake Forest midfielder Ian Harkes is No. 4 in the TopDrawerSoccer Top 100 midseason update. Harkes has been leading the charge for the Wake Forest team this season with his stellar play at center mid.

Check out the midseason update to the TDS Men’s Division I Top 100 Players.