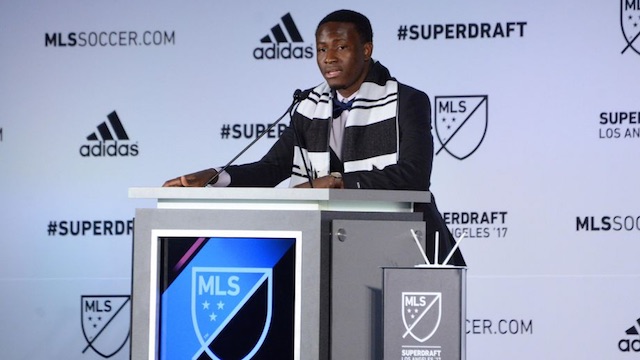 LOS ANGELES — When Abu Danladi was 16, he moved from Ghana to Santa Barbara and took his first wobbly steps on a ladder that would eventually lead him to a once unthinkable high.

How’s the first overall pick in the MLS draft sound?

Danladi added his name to the distinguished list of first overall picks Friday when Minnesota United snapped him up with their first ever draft pick. Danladi, who came out from UCLA a year early to sign a Generation adidas deal, is a rampaging forward with a cashmere touch around the box. Danladi’s pick kicked off a two-round cavalcade on Friday that largely went as expected with only a few major exceptions.

Behind Danladi, Atlanta United stuck with its No. 2 pick to snap up Syracuse sophomore center back Miles Robinson. Meanwhile, the Chicago Fire took $250,000 in allocation money in exchange for the No. 3 pick, which NYCFC snapped up to take Jonathan Lewis out of Akron.

Up until the moment the Minnesota United’s first pick came in, the Los Angeles Convention Center sat in rapt anticipation. For weeks, Duke forward Jeremy Ebobisse had largely been tipped as the No. 1 overall pick. But UCLA’s Abu Danladi had inched his way into that conversation, and by the time the draft reached its tipping point the reality was nobody knew. It could go in any number of directions.

Danladi didn’t have any insight as to whether Minnesota United was maneuvering around Ebobisse to take him instead until he heard his name ring out. But during the meeting period, Danladi came away impressed with Minnesota United coach Adrian Heath, who helped develop 2015 No. 1 overall pick Cyle Larin into one of the best rookie forwards in league history.

“I’m really excited,” Danladi said. “I spoke to (Heath) three days ago, and he’s a great coach. Everyone knows his reputation. I was like, getting an opportunity to play for you would be a blessing. He’s a striker’s coach, I’m a striker. I’m looking forward to improving. I think I’ll learn a lot from him as a coach.”

Ebobisse falls from No. 1

Perhaps the biggest surprise of the draft came shortly after Danladi came off the board. Most draft boards indicated Ebobisse, Robinson and Danladi were the top three available. The question wasn’t so much whether one would drop (that wasn’t in the discussion) but in which order they’d go.

Turns out that wasn’t quite on the mark.

Ebobisse ultimately went No. 4 to Portland, which traded up with Houston for that spot and parted with $100,000 and an international roster spot. But a pick before, NYCFC dumped $250,000 onto the Chicago Fire’s lap to swoop into the top three and take Lewis, who had two goals and 12 assists his freshman year. Lewis was a relatively late add as a Generation adidas player and wasn’t on a ton of lists as a top five player. Ebobisse, meanwhile, has been on an MLS contract for five months.

For Ebobisse, who’s suddenly in a system under highly regarded coach Caleb Porter, all in a day’s work.

“It’s unrealistic for me to not listen to (draft rumors),” Ebobisse said. “I definitely tried to not give them any weight. At the end of the day it’s just speculation, and if I listened to all the speculation then it’ll drive me crazy. I just tried to stay insulated from the whole process and I’m really happy with the way it’s turned out.

Given the fact that the GA class was small and this senior class wasn’t particularly deep, there weren’t a ton of surprises come draft day. Four of the six Generation adidas players went in the top six (Ebobisse isn’t actually on a GA contract), and it was maybe a mild surprise that Canadian Shamit Shome, who turned a number of heads at the MLS Combine, wasn’t taken. But ultimately he was enough of an unknown that he slid out of the first round.

But it mostly traveled an expected path. If there were any steals, Toronto FC managed to pick up highly regarded Notre Dame center back Brandon Aubrey at No. 21, a surprising fall that might’ve been attributable to a so-so combine. A run of right backs went in the middle section of the first round, with Chris Odoi-Atsem, Reagan Dunk and Colton Storm going at No. 12, 13 and 14 respectively. And after Robinson, the next defender off the board was Dayton’s Alhassan Abubakar, who shot up a number of draft boards late after a huge combine.

Trades were in relatively short supply as well. There were only four trades in the entire first round, and NYCFC was responsible for half of them. And, as expected, there were no goalkeepers taken in the opening round in what was otherwise a weak draft for the position.

As anyone versed in the draft knows, prospects in attendance (which is most all of them) take to the dais afterward to offer a brief statement on being selected. Mostly it’s a moment for thanks, as players rattle off the names of family members, teammates, coaches and agents. By and large there isn’t much notable about them.

That was not Zeiko Lewis’s story.

Lewis, regarded one of the most intriguing attacking prospects in the draft out of Boston College, fell to the New York Red Bulls at No. 17 before being picked. When Lewis took to the stage to give his speech, he led off with a barbed remark taking a veiled shot at the 16 times he was passed over.

“I’m glad the Red Bulls had faith in me,” Lewis told the auditorium. “At least somebody at this draft does.”

The remark caused ripples of reaction from the audience, and Lewis went on to note that he planned on making the rest of the league sorry it passed on the opportunity to draft him.

“I didn’t feel dissed by any club that didn’t pick me,” Lewis said later. “I’m not going to lose sleep over it at the end of the day. But it was definitely encouraging to see the other clubs pass up on me, because then when I play them I’m just going to look at them, and when they see the scoreboard they’ll know they made the wrong decision.”

Lewis could fill a number of roles for the super-charged Red Bulls, but he mostly likely projects as an outside winger who prefers to come in and combine. Either way, he made a lot of new fans in New York on Friday.