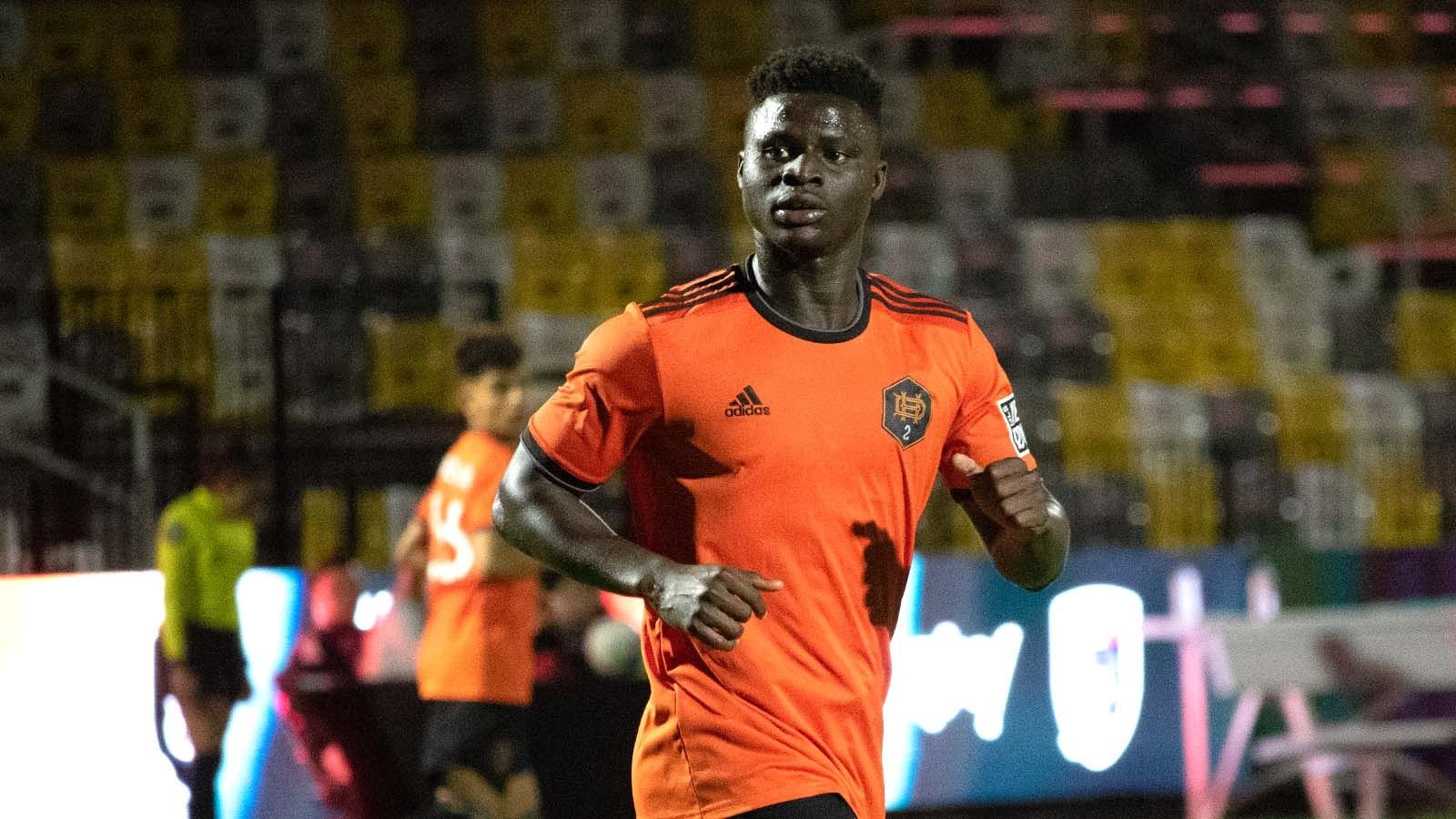 SMU striker Papa N’Doye was at home, rehabbing a season-ending back injury when his friend sent him an article. It was an MLS mock draft, and N’Doye was projected to be the No. 1 pick in the upcoming MLS SuperDraft.

As he scrolled through the article, the tears started.

“I was crying because I knew that I was out of the season,” N’Doye said.

A few months later, N’Doye could only watch as 79 names went off the board. Meanwhile, he was left undrafted.

Still considered a top college striker with a year of eligibility left, N’Doye could’ve stayed at SMU for a year to further build his credentials. With a whole offseason to recover, he could well have made good on that No. 1 overall pick prediction.

Instead, N’Doye signed a pro contract elsewhere. The Senegalese national landed a spot with Houston Dynamo II, one of the better squads competing in the inaugural season of MLS Next Pro. The signature made him one of over 10 college players to spurn eligibility in favor of playing in the newly formed league. And for those who have made the switch, it’s been a valuable stepping stone towards higher levels of the pro game.

“I want to be at the top level,” N’Doye said. “The big dream is not to stay in MLS Next Pro, because this is just the beginning.”

MLS announced the advent of MLS Next Pro back in June 2021. The idea was fairly straightforward: to create a league that could serve as a bridge between youth soccer and the highest level in North America. Every team would be directly affiliated with an MLS club, and all of the players would be signed to professional contracts.

And, crucially, they’d have the chance to impress first-team technical staff — with hopes of being promoted to the senior side.

“That's the beauty of this setup, it really prepares a young player for the leap from the Academy to the first team,” Tommy Wilson, Academy Director at the Philadelphia Union, said.

For N’Doye, heading to MLS Next Pro was a compromise of sorts. The 22-year old starred at LIU before transferring to SMU in 2021. An agreement was reached before he went to the Dallas school that he would be allowed to pursue a professional career after one full season.

And his hope — if not expectation — at the time, was to be given a chance to step out at PNC Stadium for the Dynamo’s first team. But after injury issues derailed his junior season, MLS Next Pro represented a different chance.

It’s an offer he’s seized. N’Doye has scored three and assisted three across eight games — showing flashes of the player that was once a lock for a top-five pick.

“It's very demanding,” N’Doye said. “But I'm enjoying myself so far.”

However, going pro isn’t always the easiest decision. Such was the case for Stefan Stojanovic, a standout at Georgetown. The Chicago native was prepping to finish his final year in DC when his phone rang. It was his agent, Neil Thompson, presenting a tantalizing offer from the Union II, which wanted him to fill a major role in attack for their inaugural MLS Next Pro season.

But Stojanovic, with his dream dangling before him, hesitated. His Hoyas side had come within 90 minutes of a national championship appearance in 2021, and under the guidance of Brian Wiese, Stojanovic had gone from an unheralded St Louis transfer to a deadly finisher. Another year of development might just make him a first-round pick — and a lock for an MLS first team in 2023.

There were further complicating factors, too. Stanjankovic wanted to finish his degree, something he pledged to do when he entered the college system. There was also the draw of trying to bring a national championship to DC.

“I was gonna finish school, get a great degree at Georgetown. And then hopefully play in the future.” Stojanovic said.

So, the negotiations dragged on for months. Stojanovic had countless conversations, seeking advice from Wiese, and also trying to broker the right deal with Union II. Things changed, though, when Philadelphia offered to pay for his degree. They pledged to cover tuition for online schooling at Penn — provided that he take classes over the summer and make it work around his on-pitch duties.

That proposal sealed it, and Stojanovic swiftly signed. He’s been in and out of the lineup as coach Marlon LeBlanc tinkers with his system — and tries to find the right spot for the striker. Still, it’s been a promising start.

“Coming here I want to develop into the best player I can be, and the goal is to one day be with the first team,” Stojanovic said. “I’m trying to learn new things every day and just enjoying it.”

There have been other success stories, too. Jacen Russell-Rowe spurned two years as a presumptive starter at Maryland to join the Crew II, where he’s scored five goals. Julian Gomez left Monmouth to ink a deal with NYCFC II — and has shown flashes of potential. Celio Pompeu has started four of six games with St Louis City II after opting out of his final season at Monmouth.

It’s easy to see why some have been tempted to leave. For a lot of hopefuls, MLS Next Pro is a clear way to the first team. While all franchises manage their sides differently, there’s a navigable path from reserve standout to MLS regular.

The Union’s approach, for example, is to ensure that the Union II side spends as much time around the first team as possible. That often means sharing pitches and having the chance to simply observe the life of a top-level pro. In Wilson’s eyes, it’s the best way to prepare for the next level.

“[The Union II team] have got a notion of what [being a pro] is, but they've never actually experienced that. So that's the beauty of this setup,” Wilson said.

It has also allowed clubs such as the Union to test the mettle of their academy. Wilson organized the Union II side so that he could get a look at a mix of players. That meant a bulk of academy talent playing up, some reserve pros playing down, and a handful of college players to fill out the squad. Piecing together such a patchwork of players has been a challenge for LeBlanc. The rather eclectic mix has jelled smoothly, though, with the team currently sitting in second in the eastern conference.

“We have a good team, a lot of young, young guys that are quality players,” Stojanovic said. “It's been good so far.”

The same goes for N’Doye’s Dynamo side, which is topping the western conference after winning six of its first eight contests.

Still, despite team success, the emphasis is very much on the individual, the chance to catch an eye of an assistant, to pique the curiosity of a first-team scout. It’s why N’Doye talks about his personal goals so much, why Stojanovic is open to deputizing at any position on the pitch.

And it’s why some top talent spurned an extra season or two of eligibility. With more attention, with watchful professional eyes, the opportunity to play in MLS proper might be a little bit closer.

For some, it’s simply too good an opportunity to pass up.