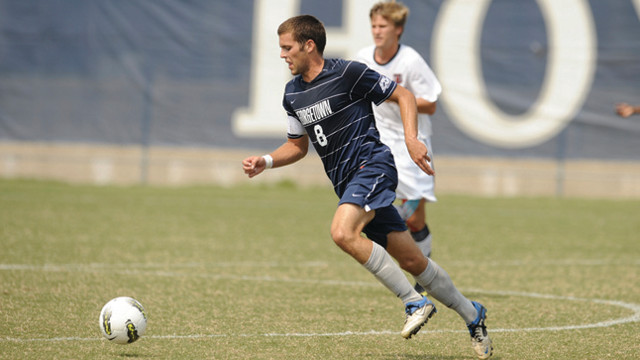 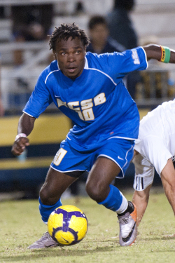 In the spring of 2011, the UC Santa Barbara Gauchos played two games against MLS teams. Machael David was the best player on the field in both games - no, not just the best Gaucho, the best player overall.

However, the David of today is not the same player. After battling through injuries for two seasons, the Ghanaian has struggled to stay out of the training room at UCSB. When he is on the field, he can be brilliant and the most influential player in college soccer, but getting back to 100% health has been his biggest battle.

This is the risk a team has to be willing to take with David. He is an imperfect prospect in the sense he is older than most draft picks, but he is a player who can step in immediately. There are agents and teams that covet his skillset, but keeping him on the field will be why he could slip come draft day.

MF Carlos Alvarez, Connecticut: The attacking midfielder scored the game winning goal as Connecticut avoided a score on the road against Pittsburgh in a 2-1 win. Also started a 1-0 loss against Providence on Wednesday where the Huskies attack sputtered completely.

F Will Bates, Virginia: The senior striker continued to round into form as the season winds down, grabbing a goal as the Cavaliers climbed back from a 2-0 deficit to win 3-2 last Friday against Virginia Tech.

MF Kyle Bekker, Boston College: As the regular season comes to a close, Bekker continues to assert himself. His clever pass set up the only goal of the game as the Eagles beat Duke 1-0.

GK James Belshaw, Duke: Postseason play this fall looks like it may elude Belshaw and the Blue Devils, as Belshaw played a pair of 90 minute matches over the last week, losing 1-0 at home to Boston College and beating Davidson 2-0 on Tuesday evening.

F Julian Cardona, Penn State: The forward was in the starting lineup against Northwestern, but went just 38 minutes as the Nittany Lions pulled off a shocking win. Has just five goals on the season, hard to know if that will be enough to attract attention from MLS.

D Greg Cochrane, Louisville: Continued to excel from his left midfield spot, as the Cardinals won 1-0 over Villanova on Saturday to pick up a Big East Division title.

MF Paolo DelPiccolo, Louisville: Retained his spot in central midfield, dictating tempo and rhythm in another win as the Cardinals defeated

F Ryan Finley, Notre Dame: The speedy striker continues to find the back of the net for the Irish, scoring a hat trick in a 3-0 win over Providence last Saturday. He also scored twice in a 3-1 win over Marquette on Wednesday evening.

D Joe Franco, Cal State Northridge: Started both of the Matadors games over the weekend at outside back. With the 2-1 win over UC Irvine, Franco and Cal State Northridge are three points away from the top seed in the Big West South Division for the postseason.

MF Jose Gomez, Creighton: Didn’t have an impact on any of the scoring as the Bluejays defeated Bradley 1-0 over the weekend.

GK Scott Goodwin, North Carolina: After conceding a goal for the first time in several weeks in a 1-0 loss to Maryland, the Tar Heel defense restored order with another shutout, a 3-0 win over Campbell.

MF Ryan Hollingshead, UCLA: Thanks to Pac-12 scheduling, UCLA had the week off from games as Jorge Salcedo’s side prepares for the Northwest trip this weekend.

D Kory Kindle, CSU Bakersfield: Started and played in both of the Roadrunners’ games over the weekend. Kindle currently has six goals to his name this season, which is impressive for an outside back, but the lack of assists is noteworthy.

M Fernando Monge, UCLA: The Bruins did not play this week. Monge returns home this weekend to Seattle for an important clash against Washington on Sunday.

D Tommy Muller, Georgetown: The center back played 90 minutes in a 2-0 defeat of Seton Hall on Wedneday, as the Hoya back line picked up another shutout.

D Jimmy Nealis, Georgetown: The attacking left back went 90 minutes in a 2-0 win over Seton Hall on Wednesday, picking up an assist.

MF Andrew Ribeiro, Creighton: Logged 90 minutes in Creighton’s 1-0 win over Bradley last week. The versatile Jay has made his home at defense for the last few games as Creighton has strung together three shutouts in a row.

F Charlie Rugg, Boston College: Coming into form as the regular season nears a conclusion, Rugg was in the starting lineup and looked dangerous against Duke in a 1-0 win.

D Eric Schoenle, West Virginia: The center back couldn’t lead his team to victory at Akron, as the Mountaineers played well but slipped up against the Zips 2-1 over last weekend.

F Blake Smith, New Mexico: Smith had two assists in the 11-0 win over UNLV on Friday to push his season tally to 11 in 14 games.

MF John Stertzer, Maryland: After playing the full shift on Friday night, a 1-0 win against North Carolina, Stertzer was supposed to get a rest in Tuesday’s matchup against Lehigh. But when the Terps struggled a bit, Stertzer came off the bench in the second half to help steady the ship.

F Emery Welshmen, Oregon State: The Canadian had a goal and an assist in the 3-2 to loss to Stanford last week. The Beavers were shutout against California on Sunday.

F Paul Wyatt, James Madison: Playing in a number of spots on the field, Wyatt scored directly from a free kick to help jumpstart JMU’s 2-1 comeback win over George Mason over the weekend.

D Scott Lakin, Northwestern (Chicago Fire, Junior): The left back put in a solid shift against Penn State in a losing effort over the weekend.

MF Wil Trapp, Akron (Columbus Crew, Sophomore): The holding midfielder continues to do all of the little things. He rarely shows up in the box score, but his link play between the defense and attack is superb. Played in both of Akron’s wins over the last week, a 2-1 defeat of West Virginia and a 1-0 win against Ohio State on Tuesday -- where Trapp actually did pick up an assist.

D Jalen Robinson, Wake Forest (D.C. United, Freshman): After going the full 90 minutes in Wake’s 3-1 defeat of NC State on Saturday, didn’t see the field as the Demon Deacons lost 1-0 to Elon Tuesday evening as he was out with an illness.

MF Collin Martin, Wake Forest (D.C. United, Freshman): Started both of Wake’s games over the past week, but couldn’t find a way to get on the scoresheet in a win and a loss.

D London Woodberry, Maryland (FC Dallas, Senior): Remained a starter in both of Maryland’s games last week. Had a sketchy turnover that result in a Lehigh when he was dispossessed of the ball in midfield.

MF Daniel Garcia, North Carolina (FC Dallas, Freshman): Garcia was relegated to a substitute’s role in the Tar Heels’ 1-0 loss on the road to Maryland last Friday. He returned to the starting lineup, played 73 minutes an chipping in an assist in a 3-0 win against Campbell.

D Mikey Ambrose, Maryland (FC Dallas, Freshman): The left back continues to play extremely well, now the incumbent starter as senior Taylor Kemp's status is up in the air after undergoing sports hernia surgery. Added an assist in Tuesday’s 2-1 defeat of Lehigh.

F Gyasi Zardes, CSU Bakersfield (LA Galaxy, Junior): Contributed three goals and an assist in the 4-1 win over Houston Baptist on Friday. He was shut out against New Mexico on Sunday. Zardes is tied for third in the nation for goals scored this season.

MF Scott Caldwell, Akron (New England Revolution, Senior): Found the back of the net in a 2-1 win over West Virginia last weekend, and also was influential against Ohio State on Tuesday night despite not finding the back of the net.

F Sean Okoli, Wake Forest (Seattle Sounders, Sophomore): The forward scored his first ever hat trick for the Demon Deacons, accounting for the entire offense in a 3-1 defeat of NC State on Saturday.

D DeAndre Yedlin, Akron (Seattle Sounders, Sophomore): After struggling against the Mountaineers -- Yedlin was yanked off the field after picking up a yellow card late in the game -- he was freed up a bit more in Tuesday’s matchup against Ohio State, going the full 90.