Attributes: Good engine, strong on the ball, strikes from distance, finishes with both feet

The lasting impression of Ryan Hollingshead on many scouts is his goal in the 2011 College Cup against North Carolina. The thunderous strike off his left foot from 25 yards out nearly ripped a hole in the net and made many MLS teams immediately take notice of the junior.

Now, in his senior season, Hollingshead is finally on the verge of making the jump to the league with eager parties awaiting his arrival.

The towering midfielder/winger has been lost in the shuffle of big time players who have passed though Westwood over the years, but Bruins fans know Hollingshead has quietly been one of the most consistent players over the last three and a half years.

He is good on the dribble and can serve a cross. He also knows how to use his body to edge out defenders. Listed at 6’1, 180, he has the size and strength to handle the athletic and physically punishing MLS grind.

At the next level, Hollingshead is an immediate impact player, but not likely to garner top half of the draft interest due to a perceived lack of athleticism. Regardless, he will make an MLS team more competitive with his addition.

MF Carlos Alvarez, Connecticut: The Huskies captain had a goal and an assist against Notre Dame in a 2-1 win on Saturday. Alvarez has registered a point in six straight games heading into Wednesday’s clash against Georgetown.

F Will Bates, Virginia: The still recovering forward played 90 minutes as Virginia dropped a disappointing 2-0 results at home against Clemson.

MF Kyle Bekker, Boston College: Remained in the starting lineup as BC saw off a conference challenge by North Carolina State(m) 2-0. Bekker couldn’t get on the score sheet either.

GK James Belshaw, Duke: The usually reliable goalkeeper made a pretty critical error against North Carolina. Up a goal, in horrible conditions, Belshaw let a long range Tar Heel shot trickle past him for a late equalizer with Duke down two men. The Blue Devils went on to lose 2-1.

F Ashton Bennett, Coastal Carolina: Back in the starting lineup, Bennett found the back of the net as the Chanticleers beat some easy opposition in Presbyterian College(m) 3-0 over the weekend.

F Julian Cardona, Penn State: Started both of Penn State’s last two games, but the offense sputtered in a pair of 1-0 losses -- one to Big Ten rivals Indiana.

D Greg Cochrane, Louisville: Continued as a starter in his left midfield spot, scoring a goal as Louisville fell 2-1 against Rutgers on the road. 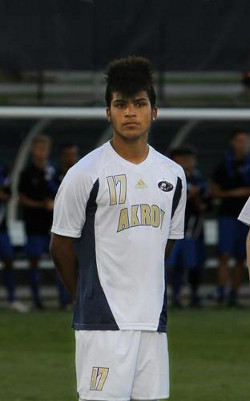 F Ryan Finley, Notre Dame: It doesn’t look like Finley will ever be a starter this season, and he continues to play a reserve role for the Irish, but he couldn’t find the back of the net as Notre Dame fell 2-1.

MF Jose Gomez, Creighton: Choco has been asked to play a new position, striker, for the Jays over the last month. Instead of quitting and complaining, he has put in the effort up top even though the stats do not show much for his work. There is something to be said about a young man biting the bullet and doing what is best for the team.

GK Scott Goodwin, North Carolina: Picked up another shutout on Tuesday night as the Tar Heels eased past Georgia Southern by a 2-0 scoreline.

F Hakan Ilhan, UNC Greensboro: Scored the game-winning goal against Appalachian State on Saturday. Ilhan has six goals in 11 games for the Spartans.

D Taylor Kemp, Maryland: The left back played 59 minutes in Maryland’s 3-2 win over the College of Charleston, picking up an assist along the way as injury troubles continue to plague Kemp a bit.

M Jonathan Mendoza, Stetson: Had a goal and an assist in Stetson’s 2-1 win over Florida Atlantic last week. Those were his first points of the season.

M Fernando Monge, UCLA: Has a knack for putting himself in the right place at the right time. Scored a goal against Stanford on Friday and now leads the Bruins with four goals on the year.

D Tommy Muller, Georgetown: Continued to shake off his injury problems and was back in the starting lineup as the Hoyas won again, a 3-1 defeat of Pittsburgh.

D Jimmy Nealis, Georgetown: The left back remained a steady presence in the starting lineup against Pittsburgh.

MF Leston Paul, South Florida: The leader of the Bulls had two shots in the 1-1 draw against Villanova last week. The stats are not there for Paul, but he usually has a critical role in any result for the Big East side.

MF Dillon Powers, Notre Dame: Tallied a goal as the Irish went on to lose 2-1 on the road against Connecticut.

MF Andrew Ribeiro, Creighton: The Creighton coaching staff has asked Ribeiro to play pretty much every position this season, as well as nearly every minute. The senior has logged 1009 minutes, by far the most of any Jay.

F Charlie Rugg, Boston College: Continued to find his form and the back of the net, as Rugg picked up a goal and an assist as the Eagles defeated ACC foes North Carolina State(m) 2-0.

F Devon Sandoval, New Mexico: Sandoval just seems to always produce goals or opportunities. Over the weekend, he had an assist in New Mexico’s 2-1 win over Houston Baptist.

D Eric Schoenle, West Virginia: Going up against another senior prospect in Elon’s Chris Thomas, Schoenle couldn’t help his team hold on to a 2-1 lead with just five minutes to go, as they conceded two quick goals on Tuesday night to fall 3-2.

F Blake Smith, New Mexico: He had an assist in the 2-1 win over Houston Baptist. Smith set up James Rogers for the game-winning tally.

F Donnie Smith, Charlotte: One shot in the 2-1 win over UCF last week. Smith has two goals and an assist on the year.

MF John Stertzer, Maryland: Started and played 90 minutes for the Terps in the 3-2 win over College of Charleston.

F Emery Welshmen, Oregon State: Welshman was not able to break through against the stout Washington defense last week. He faces an equally challenging task this weekend with road games against San Diego State and UCLA.

MF Dillon Serna, Akron (Colorado Rapids, Freshman): Stayed in the midfield role that suits him best as the Zips romped over MAC opposition Buffalo by a 4-0 score.

D Chad Barson, Akron (Columbus Crew, Senior): Marshalled the back line from his usual center back spot as the Zips picked up a 4-0 shutout win over Buffalo.

D Jalen Robinson, Wake Forest (D.C. United, Freshman): Started back-to-back games at center back as Wake picked up a pair of wins, 4-0 over Virginia Tech and 2-0 against Davidson.

D Mikey Ambrose, Maryland (FC Dallas, Freshman): The outside back played 60 minutes as Maryland held off the College of Charleston by a 3-2 score.

D London Woodberry, Maryland (FC Dallas, Senior): Had a huge game for the Terps last weekend, playing 90 minutes and scoring two set-piece goals -- including the game winner -- in a 3-2 win.

D Bradley Bourgeois, Tulsa (Houston Dynamo, Freshman): Tulsa has shutout its last three opponents including a win over the previously undefeated Marshall Herd. Bourgeois looks like he might be one to make the quick jump to the next level.

F Gyasi Zardes, CSU Bakersfield (LA Galaxy, Junior): After the 1-1 draw between CSU Bakersfield and SMU, Tim McClements, the Mustangs head coach, remarked, “[Zardes] was every bit as good as advertised.” Many coaches think that, but not many say it in the postgame release.

F Allando Matheson, Connecticut (Toronto FC, Freshman): Came off the bench and logged 65 minutes in the 2-1 win over Notre Dame.