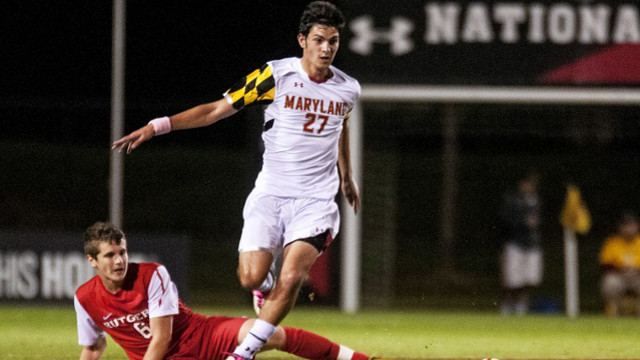 Attributes: Central midfielder at the college level, good vision, touch and passing ability. Can get forward and score, but projects to be more of a two-way midfielder, despite eliciting memories of another former Terp.

Through the first half of his senior season, John Stertzer hasn’t found the back of the net at the same prodigious clip he did in 2011. And that’s no problem, as goal-scoring isn’t his primary focus on a loaded Terps team.

Stertzer acts as the link between the back line and the offense, and he’s done so with great efficiency so far this year. It’s not something that necessarily shows up on the stat sheet either -- and in fact, Stertzer will probably excel the most at the next level playing a bit further back in the midfield, as he has the pace and legs to cover a lot of ground.

A lot of that will of course ends up what team drafts him, and how his season finishes out. He’s a proven leader at the college level, and a strong run to the end of the year that includes an ACC Championship or College Cup appearance is certainly how he wants to wrap things up in College Park.

MF Carlos Alvarez, Connecticut: Put in an 80-minute shift in Connecticut’s 2-0 win over Iona on Tuesday evening as the Huskies bounced back from a 3-2 loss on the road against Marquette. 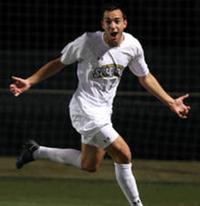 F Will Bates, Virginia: As the Cavaliers are struggling a bit for wins in the ACC, Bates helped his side erase a 1-0 deficit against High Point as he scored twice, including a game winner in the final five minutes to win the game 2-1.

MF Kyle Bekker, Boston College: The midfielder is finally settling in after battling injuries throughout the beginning of the season, and was a starter in Boston College’s 1-0 road win against Wake Forest. He also set up the game-winning goal in that game.

GK James Belshaw, Duke: Played 90 minutes, made four saves and picked up a shutout in Duke’s 1-0 win against North Carolina State as the Blue Devils snapped a two-game losing streak.

F Ashton Bennett, Coastal Carolina: Scored twice in a 3-0 win over UNC Ashville. The numbers may not be the same as last year, but still proving to be dangerous.

F Julian Cardona, Penn State: Only logged 35 minutes off the bench in the 1-1 draw with Michigan last week.

D Greg Cochrane, Louisville: Continues to provide a spark for the offense, as Cochrane scored and added an assist as the Cardinals beat Syracuse 2-1 over the weekend.

MF Machael David, UC Santa Barbara: Remains sidelined with an injury. He is expected to return to the lineup this week for the Gauchos’ game against UC Davis.

MF Paolo DelPiccolo, Louisville: Remained as a starter in the midfield, providing his usual stability and defensive strength.

F Ryan Finley, Notre Dame: Continued to find the back of the net, scoring two goals in a 3-0 win against the Hoyas over the weekend.

MF Jose Gomez, Creighton: The midfield maestro put in an extremely impressive shift in Creighton’s 3-2 defeat of Princeton, as he picked up an assist on all three goals.

GK Scott Goodwin, North Carolina: Picked up a pair of shutouts in his last two outings, a 2-0 win over Clemson and a 1-0 defeat of Davison.

MF Ryan Hollingshead, UCLA: Provided an assist in the 2-1 loss to Washington on Monday. He was solid in the game against Oregon State as well despite the lack of impact on the score sheet.

F Hakan Ilhan, UNC Greensboro: Had an assist in the Spartans 2-1 loss to College of Charleston on Tuesday. Ilhan has six goals and six assists on the season.

D Taylor Kemp, Maryland: Played 74 minutes last Friday as the Terps won 1-0 against rivals Virginia, and then sat out the subsequent game, a 2-1 defeat of Rutgers.

D Kory Kindle, CSU Bakersfield: Struggled defensively against San Jose State on Friday in a 2-1 loss for the Roadrunners. Bounced back with the game-winning goal against Seattle on Sunday.

M Fernando Monge, UCLA: Had a very quiet outing against Washington, as the direct play bypassed the midfield.

D Tommy Muller, Georgetown: The center back has looked healthy and started a pair of games over the past week, a 3-0 loss to Notre Dame and a 2-0 win over Lehigh.

D Jimmy Nealis, Georgetown: The attacking left back continues to get forward with aplomb and add to the Hoyas offense. Added an assist in his side’s 2-0 win against Lehigh.

MF Leston Paul, South Florida: Scored his third goal of the season in the 2-2 draw with Rutgers on Saturday.

MF Dillon Powers, Notre Dame: The two-way midfielder started and played in both of Notre Dame’s games over the past week -- a 3-0 defeat of Georgetown last Saturday, and a 2-1 loss versus Northwestern.

MF Andrew Ribeiro, Creighton: Had the game-winning goal in the 1-0 victory over SIU Edwardsville last week then played every minute in the 3-2 victory over Princeton on Tuesday.

F Charlie Rugg, Boston College: The forward continues to heat up as he finds his fitness, and he scored the game-winning goal against Wake Forest, an important 1-0 road win.

F Devon Sandoval, New Mexico: Scored the game-winning goal against Denver on Sunday. The Lobos offense struggled against the conservative approach of some of its MPSF opposition.

D Eric Schoenle, West Virginia: Started on the bench for the first time this year in Sunday’s 2-0 victory over Buffalo. Schoenle showed good resolve to come off the bench and net his fifth goal of the season in the game.

F Blake Smith, New Mexico: Accounted for a handful of shots or so in the two games over the weekend, but did produce any finishing product for the Lobos.

F Donnie Smith, Charlotte: Scored the game-winner and assisted on another goal for the 49ers in a 2-0 victory over Richmond. Smith has three goals and two assists this season.

F Chris Thomas, Elon: The nation’s leading scorer notched his 16th of the campaign in a 1-0 result over Furman. He was shutout in the 3-4 loss to Wofford over the weekend.

F Emery Welshman, Oregon State: The speedy forward had the game-winner against San Diego State on Sunday. Arguably, he should have had a goal against UCLA too. Welshman is deceptively quick, and will find a spot on an MLS roster.

MF Ian Christianson, Georgetown (Chicago Fire, Senior): The central midfielder continued to get minutes and clog up the middle of the field for the Hoyas, getting a start in each of Georgetown’s last two games.

MF Dillon Serna, Akron (Colorado Rapids, Freshman): Scored and assisted on a goal each as the Zips continued to cruise through MAC play, winning 4-0 over Florida Atlantic. 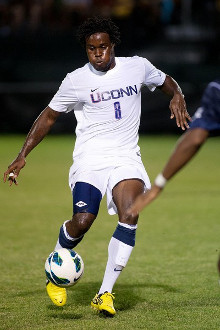 D Matt Wiet, UCLA (Columbus Crew, Senior): Struggled with the pace of Oregon State’s forwards at times, but eventually used his cleverness to overcome speed. The Bruins defense, as a whole, did not handle the physicality of the Washington forwards well on Monday.

D Mikey Ambrose, Maryland (FC Dallas, Freshman): Continues to hold onto his starting spot along the Terps back line, going as the right back against Virginia, and moving over to the left in Maryland’s 2-1 defeat of Rutgers on Tuesday.

MF Danny Garcia, North Carolina (FC Dallas, Freshman): The promising young players scored his first collegiate goal on Tuesday night in a 1-0 win over Davidson. Continues to earn starts and provide a spark to the offense.

F Brandon Allen, Georgetown (New York Red Bulls, Freshman): After his Hoyas were blanked on Saturday against the Irish, the forward return to the score sheet, scoring the second goal in a 2-0 win over Lehigh.

MF Bryan Ciesiulka, Marquette (Chicago Fire, Junior): His cross set up the game-winner for senior Andy Huftalin on Tuesday in a 1-0 win over Northern Illinois.

MF Troy Peterson, College of Charleston (Seattle Sounders, Sophomore): Peterson has been a key piece for Charleston all season in the center of the field. The Sounders product has two goals and one assist.

F Allando Matheson, Connecticut (Toronto FC, Freshman): The forward continued to come in off the bench and score, adding a goal against Iona on Tuesday night in a 2-0 win.