Certainly the hardest position on the field to truly assess, goalkeepers have the most difficult time transitioning to the pro game for a variety of reasons.

Regardless, there are plenty of seniors hoping to make the leap during the upcoming winter months. Here’s a look at ten candidates poised to make the jump: 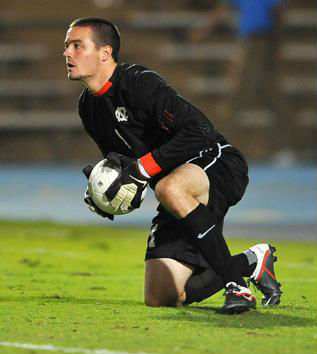 Rundown: Duke’s netminder for the past four years from Nottingham, England, Belshaw must overcome his international status to land on a team in MLS. He’s a good college ‘keeper as his numbers reflect, but he’s prone to a goal conceding gaffe or two every game that makes one wonder if he has the consistency to play at the highest level.

Rundown: Failure to progress to the NCAA tournament likely cost Blackburn a shot at the combine, even with seven goalkeepers getting invited. The two-year starter – Blackburn assumed the role after Bryan Meredith’s graduation – Blackburn has a high shutout percent and doesn’t concede a lot of goals, but it’s hard to see him landing on a pro roster next season.

Rundown: The numbers are very impressive for the three-year starter and national champion from a year ago. Goodwin never had lots to do for Carolina with a good back line in front of him, especially in 2012, when he only conceded seven goals, though making just 45 saves along the way. He has the tools to land on a roster somewhere, and can organize and direct a back line well.

Rundown: Regarded by some as the most promising goalkeeper in this senior crop, Jackson lacks the experience of some of his peers, having not played a game in 2010 and only spending one of his four years in college as a full-time starter. But he arguably saved his best for last, coming in as a senior and putting in a very good season, making 60 saves on the way to leading Santa Clara to a decent year overall. He’ll need to have a good combine in order to end up as a Supplemental pick.

Rundown: His numbers aren’t dazzling – conceded more than a goal per game in his four years at Boston College, Luthy isn’t an overwhelming pro prospect. However, reports are that the experience in an ACC program has done enough to attract a contract offer from the Columbus Crew, after spending time in their Academy before college. As a likely third choice goalkeeper, that would make sense for Luthy, giving him a chance to refine his game and continue to development in that environment.

Rundown: The final stats for Meves after his four years at Akron are special. Setting records for most shutouts and minutes played (8,608), he’s backstopped some of the best defenses in college soccer – so what does it mean for his ability in MLS? After a rocky junior year, where he conceded some goals he probably shouldn’t have, Meves rebounded with a great senior season, and has himself poised to at the very least, end up in a preseason camp somewhere across the league.

Rundown: No player in this group helped himself more than Soffner, who was at the heart of Indiana’s successful championship quest. His prospects for a pro career aren’t too shabby either – he’s got an impressive frame, gets down well to stop shots and is quick enough to find an MLS home as a cheap third-stringer.

Rundown: Another goalkeeper finishing off his collegiate career in style, Stuver’s nine shutouts helped lead his Cleveland State side to a first NCAA tournament appearance since 1980. He’ll need to turn heads at the upcoming combine – a very difficult task for goalkeepers – to end up getting drafted.

Rundown: The combine is obviously full of ‘keepers, and there wasn’t room for Walsh, who split time with Patrick Wall this season. That decision is probably what hurt’s Walsh’s chance of getting a look, but he’s one of the biggest goalkeepers in the class who still could end up invited to a preseason camp at some point – although getting picked in the draft is probably a bridge too far for him.

Rundown: A record-setting star for the Thundering Herd, Withrow picked up Conference USA Co-player of the year honors that likely helped him to land an invite. He’s got to prove he belongs there in order for any MLS club to take a good, hard look at him, as there aren’t a lot of things on paper that stand out.