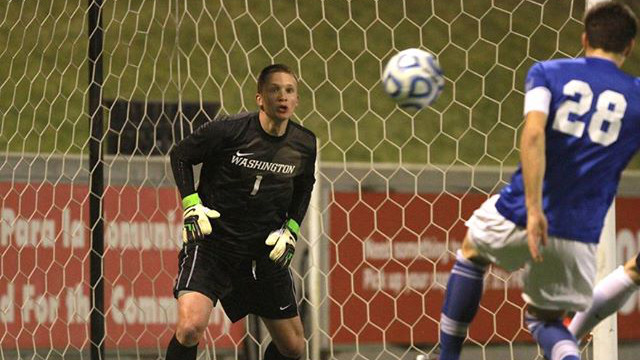 On Tuesday night (while most of you watched the U.S. national team qualify for the 2014 World Cup), Washington goalkeeper Spencer Richey was carted off the field at Joseph J. Morrone Stadium in Storrs, Conn. After a collision with a Connecticut forward, the senior goalkeeper was left laying on the grass with a deafening silence blanketing the stadium.

Shortly after the game ended in a scoreless draw, the fears about losing Richey for the season turned into reality.

The Huskies sent out a release on Wednesday morning to announce that the goalkeeper had suffered a broken leg and would be out for the remainder of the season. The release also mentioned that the Washington native could apply for a medical redshirt to return for a fifth season with the Huskies, but that decision would come at a later date.

When word trickled out late Tuesday night about the then suspected broken leg, there was a unanimous choir singing the accolades of the Washington senior captain. Pac-12 coaches expressed accordant sympathy for the four-year starter in purple and gold. All who have crossed paths with the former U.S. U17 Men’s National Team goalkeeper shared the same admiration for his fierce competitiveness on the field.

Richey, who was profiled during the first week of the season as an MLS target, was rated as the best senior goalkeeper prospect from the Pac-12 prior to the injury. There’s uncertainty about his future, as there would be for any player following an injury, and much of his professional aspirations will depend on whether Richey returns for a fifth year or not.

While that decisions waits, Richey has other plans as he tweeted on Wednesday from an emergency room in Connecticut shortly past 2 a.m.

“Abouta be the number 1 cheerleader in the nation starting Friday vs. Brown.”