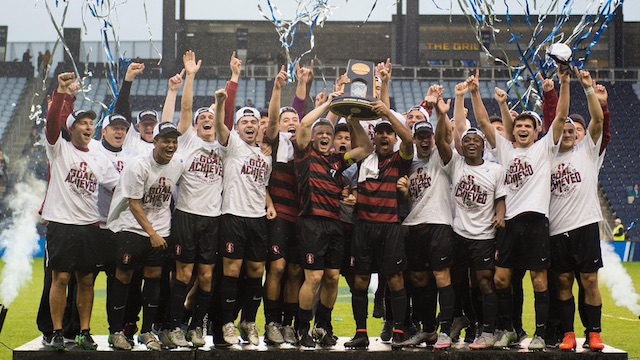 KANSAS CITY, Kan. — For the last year, and maybe longer than that, the speculation surrounding Jordan Morris’ professional career has hounded him at every step he’s taken at Stanford. Since scoring against Mexico earlier this year, the chatter launched into the stratosphere.

On Sunday, the unspoken question before Stanford’s College Cup title matchup against Clemson was whether it would be Morris’ last in the black and red hoops, whether he’d take the record Homegrown deal the Seattle Sounders dropped on the table for him this offseason. Whether he’d finally become a pro after his junior season.

Morris didn’t answer any specific questions about his future on Sunday - he deferred his answer on the topic to a later date - but he made one more statement about the luminescence of his present. And boy was it bright on Sunday.

Morris scored goals in the second and 51st minutes, and Brandon Vincent tacked on a penalty Morris drew in the 71st to guide the way to a 4-0 rout of Clemson in the title match of the College Cup at Sporting Park. Eric Verso tacked on a fourth for good measure in the 74th to polish a long run and give the Cardinal more goals than any team in a College Cup final since 1996.

The win was Stanford’s first men’s soccer national title in school history in just its third ever trip, and it guaranteed the school at least one national title for a remarkable 40th consecutive school year.

It also matched the most lopsided win in College Cup history, a four-goal margin last hit back in 1975. Wherever this Stanford’s team place in history ultimately rests, it’ll be up with the greats after an 18-2-3 season in the midst of the parity era.

“We get to be with these guys from the recruiting process, from when they’re about 16 just seeing them briefly, then all the way through their college careers,” said Stanford coach Jeremy Gunn, who won a national title with Stanford in his fourth year leading the Cardinal. “That’s the really neat thing, that’s the really exciting thing. You look at guys out on the field who were absolute studs. A couple of them, when they arrived were just young freshmen wondering if they were going to make it.”

Whether Morris was in that boat or not during his freshman year out of the Sounders Academy in 2013, he certainly made quite the statement on Sunday. He became the first player to score two goals in a DI men’s soccer title game since UCLA’s Seth George in 1997, and after the game he was named the tourney MVP. Clemson struggled throughout the afternoon to match Stanford’s pace up top, and both of Morris’s goals were trademark finishes USMNT fans could easily match with his goal against Mexico in a USMNT jersey earlier this year.

After the match, the question of Morris’s future hovered over the proceedings like a fog. Would Morris, arguably the biggest American college soccer star in recent memory, use the pulpit provided by scoring two goals in a national title game to announce his intentions to go pro? Or would he announce he was seeing out his career at Stanford and stay through his senior year to earn his degree first?

Whether Morris has made up his mind already or not, that decision will have to wait.

“I’m going to address that later,” Morris said after the game. “I think right now it’s all about the team, all about appreciating and celebrating this moment. We’ve worked so hard as a team to get where we are, and to come out as champions is amazing. That’ll come later, but for right now I’m going to celebrate with my brothers up here.”

Morris’s acclimation process throughout this season - which he spent in and out of U.S. Men’s National Team camp - wasn’t always easy, but the team prepared to the extent that it never lost a game with Morris out of the lineup. Morris didn’t score in Stanford’s semifinal win in penalty kicks over Akron - he did score his penalty - but his impact was undeniable in the final.

For his teammates and coaches, the enormity of Morris’s impact despite having to switch gears between national team and college duties this season was no surprise. Just Morris being Morris.

“The players have handled it well, and Jordan’s handled it amazingly well because he just does his job. He comes back in and doesn’t want to flaunt it,” Gunn said. “We were saying the other day, we’re traveling out here and some of the guys have to bring extra suitcases. They’d just finished finals, they’re out of the dorms and so they’re going to be dispersing in different directions. (Morris) has got his extra bag, and it’s a national team bag. So we’re all giving him crap about it, and he ends up getting some athletic tape and tapes it up so you can’t see the emblem. He’s just that type of a guy.”

After Friday’s blasé round of scoreless games - both led to penalties after 110 minutes - all four coaches lamented the lack of an early goal in either game to knock the top off the nitrous oxide canisters. Stanford’s second minute tally on Sunday provided the jolt, but Clemson was unable to fully open up and create chances. Whether browbeaten by a physical encounter with Syracuse on Friday or just pushed back by Stanford’s constant pressure, Clemson had zero answer for Stanford’s all-action strategy. The Tigers had 11 shots but forced Stanford keeper Andrew Epstein to make just a single save.

And unlike Friday, the teams didn’t have to wait long for the goal that cracked the game wide open.

Just a minute after kickoff, left midfielder Corey Baird kicked past his marker on the left flank, only just kept himself inbounds and flew toward the box. Eric Verso had swung inside from the right to overlap with Morris, and Clemson’s otherwise sterling center back tandem of Patrick Bunk-Andersen and Kyle Fisher crossed wires.

So when Baird whipped in his drag-back cross to the top of the box to Verso, Morris rotated into a clean patch of grass toward the right post. Verso turned his tapped pass toward Morris, just yards away, and Morris blasted his shot into the upper corner. He doesn’t miss from there.

Morris’s second changed the complexion of the game. He took a pass from Baird just outside the box, bulled and twirled his way past MLS SuperDraft hopeful Kyle Fisher and chipped Andrew Tarbell to double the lead just after halftime.

“In our locker room we have a magnet board where we look at the critical factors in the game, and one of the critical factors is scoring the second goal because obviously it’s an equalizing goal or you go down 2-0 and you have a mountain to climb,” Clemson coach Mike Noonan said. “I do think we had gotten into a little bit of a rhythm, and we just switched off.”

It was a costly mistake. Clemson did have more possession on the whole, but Stanford’s outstanding central midfield tandem of Ty Thompson and Slater Meehan did impressive work keeping heat off center backs Tomas Hilliard-Arce and Brian Nana-Sinkam. As a result, the vast majority of Clemson’s action was outside the attacking third. When the Tigers did have chances to build into Stanford’s box, they almost invariably fizzled before they got to Epstein.

Whether Morris does turn pro or not, one of his teammates is nearly assured of being drafted next month. Senior left back Brandon Vincent is one of the top defensive prospects in the nation, and most MLS teams will be salivating over his particular position in tandem with his ability. Vincent punctuated his final college game with a well-taken penalty with 19 minutes left.

More importantly, Vincent and the back line didn’t give up a single goal in Kansas City, and Vincent’s work pushing forward on the left gave the Cardinal a another dimension.

“We were definitely sitting back (in the first half) and letting them take the game to us, which in the second half I think we fixed,” Vincent said. “We got on the front studs. They got their chances - they’re a quality team, you expect that - but just kept going after it. Just keeping up the intensity and finishing out strong.”

Now, an offseason of speculation awaits. Will Morris go pro or not? For now, the team is simply focused on celebrating its first ever national championship.