Long road trips are never easy, but thanks to two wins away from home, West Virginia forced its way into the TopDrawerSoccer.com women's Top 25 this week, coming in at No. 22. 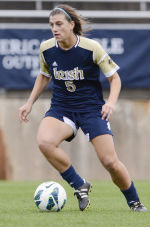 Friday night the Mountaineers paid a visit to Stillwater, Okla., to begin its Big XII conference schedule. Goals from Kate Schwindel and Kelsie Maloney paced WVU to a 2-1 win over Oklahoma State. Sunday saw the team wrap up the trip in a wild encounter, holding off Bayor(w) for a 4-3 victory down in Waco, Texas. Frances Silva's tally late in the second half proved to be the decisive tally on the day.

Elsewhere in the Top 25, No. 1 Virginia extended its winning streak to 11 games overall, but neither was easy. Last Thursday, the Cavaliers went down 2-0 against Duke, only to come storming back with three second half goals to win 3-2. On Sunday, Virginia managed to hold off a plucky Maryland side, engineering a 1-0 win back on home turf.

Keeping pace at No. 2, Stanford opened up its Pac-12 schedule with a trip to Colorado on Saturday. With big guns Taylor Uhl and Courtney Verloo both finding the back of the net, the Cardinal emerged 2-0 winners. Also victorious in its first Pac-12 action was UCLA, as the No. 3-ranked Bruins defeated Arizona 2-1 on Sunday, Sept. 29. Tayor Smith and Sam Mewis provided the offense in the victory.

Lurking not too far behind the top three is Florida State, maintaining its grip on the No. 4 spot. After kicking things off with a 4-0 defeat of Miami (FL), the Seminoles couldn't find a winner yet still managed a 1-1 draw against a rapidly-improving Clemson squad on Sunday.

Perhaps most impressive of the top five was Notre Dame. Midfielder Cari Roccaro was in impressive form, scoring a hat trick on Thursday in a 5-0 defeat of Maryland, Roccarro had a goal and two assists as the Irish cruised past Pittsburgh 3-0 on Sunday.

Rounding out the rest of the top 10 is North Carolina, Penn State, Georgetown, Portland and Florida. The Gators were one of a few top 25 teams to suffer an upset over the weekend, as the Gators lost 1-0 against Missouri in a Sunday SEC clash.